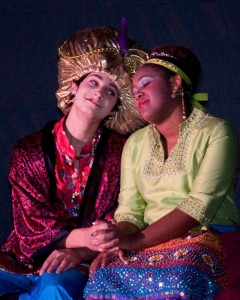 The audiences on Saturday evening, December 4, and Sunday afternoon, December 5, were treated to the magic of song, dance, drama and visual delights by an Andes Central School cast ranging through the grades of K-12.

But it is no secret that it takes a lot more than a few rubs on a genie’s lamp to bring a production like this to fruition.

Director John Bernhardt, technical director Edward Sanford, and Tamara Snyder and Janice Armstrong who contributed musical direction and choreography, might head the list. But the entire staff and large numbers of the student population contributed to the effort. The cast and narrators were all outstanding. Zachery Grapes as Aladdin was totally comfortable inhabiting the stage and specializing in physical drama and humor; Jade Litaker as Jasmine, with her sweet, powerful and expressive voice left us wanting to hear her sing soon again. Jonathan Andrews as the parrot Iago charmed us with his subtle and dryly delivered lines and attendant gestures. Gina Tait as a wisecracking Genie kept us guessing, and Zachary Cyrelson’s Abu the Monkey brought down the house. Narrators and dancers moved the production smoothly from start to finish.

This version of Aladdin was specifically tailored to a school production, and was an excellent choice for a school such as Andes to put on. We look forward to seeing more theater from our local school.~