When I studied forestry and surveying at the NYS Ranger School up in Wanakena in the Adirondacks back in 1960, forestry was about identifying tree species, felling trees, what trees to fell, and planting trees and how to care for them. The forests back then were healthy, and using proper silvicultural methods guaranteed that there would be good forest regeneration of those species valuable for timber and wildlife food and habitat. Things were very positive back then and it was wonderful to work in the woods doing what I loved, a great break from my job with the NYC Police Department on the tough streets of the upper west side of Manhattan.

Now our forests are faced with multiple threats. Between ongoing development, parcelization (see my documentary Parcelizing the Catskills and the Boiled Frog Syndrome), fragmentation and the multiple forest pests we are desperately trying, and not succeeding, to fend off, things look rather bleak. 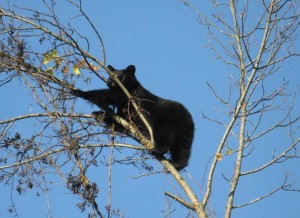 We’ve lost the American Chestnut and Elm, and are losing our Beech, Butternut, Walnut, and Hemlock trees. Our Ash, and possibly other northeastern hardwoods, is in danger if the Asian Long Horned Beatle is not contained and exterminated. Apparently Ash trees are doomed because of our inability to contain the Emerald Ash Borer. All of these tree species have been killed off or about to be because of our introduction of foreign pests to which our trees have no resistance, spread by the continued growth of intercontinental travel and commerce. Add to this the threat of global warming and where all this will lead and what our forests will look like in 50 – 100 years time I know not, but be assured they will be nothing like they are today.

Other ongoing ecological disasters are the loss of millions of our bat species due to white nose syndrome, a fungus of unknown origin; honey bee colony collapse, again due to an unknown fungus; and, according to a scientific journal I was reading, all sea water chemistry is becoming more acidic resulting in the inability of tiny creatures at the bottom of the web of sea life to form their shells. What’s next?

On a positive note many of my large Red Oak trees seem to have survived three years of defoliation by the forest tent caterpillars and some have even produced acorns. A few of the wild apple trees have apples and apparently the bears have yet to find them. Speaking of bears, they have gotten into the habit of flipping over my benches, mauling my bluebird boxes and even tearing apart my plastic sapling protectors. It is becoming apparent that they feel anything man-made does not belong in their forest, and they have their own remedy. The one coming down to the corn field to wreak havoc is a regular, and just may succumb to a well-placed arrow come bow season. Of course bear meat cannot compete with venison, which I consider gourmet, so he may get a pass. See the shot of a young bear feeding on wild grapes taken by my friend Jim Waters, the executive director of the Catskill Forest Association.

Have you ever had an encounter with what I call a fearless warbler? I had one the other day. The little guy flew onto my car roof as I was unloading my kayak not more than two feet from my face, hopped a little closer, looked me in the eye, cocked his head as if trying to understand what I was and what the heck was I doing. He finally flew off and I bid him farewell on his long and perilous journey to somewhere in South America.

I quote what I believe to be at this time in history a very poignant parable: “Only when the last tree has died and the last river poisoned and the last fish caught will we realize that we can’t eat money”.

May the forest be with you. ~