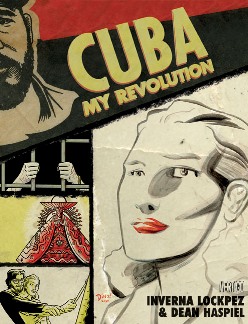 Inverna Lockpez, a native of Cuba and well-known painter/curator in New York City, built a studio in the Catskills in the 1980’s because our misty mountains, winding creeks and rushing rivers reminded her of her native country. For 25 years she celebrated our region’s landscape, most notably in her Noble Barn series, released in book form in 2008, the year her Covered Bridge series opened at Chace-Randall Gallery. Walk into the gallery now, however, and you will find that she is painting pelicans and seagulls. Inverna Lockpez has moved from Andes to northern Florida—but not without again winning national recognition and praise, this time as a writer.

Cuba, My Revolution is a graphic novel, written by Lockpez with art by Emmy award winning graphic artist Dean Haspiel and published this year by DC Comics. It is the story of 17-year-old Sonya who believes in the promise of Fidel Castro and the Cuban Revolution. It is Inverna’s story. In 1959, Inverna Lockpez, a medical student who dreamt of becoming a painter, joined Castro’s militia and served as a volunteer medic. During the Bay of Pigs, she was imprisoned and tortured by her own comrades. Physically and emotionally scarred upon her release, she turned solely to art. Since she no longer had a place or belief in Castro’s regime, she defected to Miami in 1965. With her came a handful of drawings. These drawings, as well as drawings by Dean Haspiel for Cuba, My Revolution, are on exhibition at The Kentler International Drawing Space, Red Hook, Brooklyn, through December 12.

Now her life is filled with book signings, literary panels, BBC and major print interviews and reviews, such as Publisher’s Weekly, Latina Magazine and El Nuevo Herald, Miami. It’s a whirlwind of activity compared to her life in Andes and Margaretville–not that these mountains did not keep her busy:

By the time I met Inverna in 2002, she had already won several Decentralization Grants through the Roxbury Arts Group, opened her Noble Barn exhibition at RAG, sold her Frog Alley mill house and built her home and studio on 23 acres up Canada Hollow. She and Barbara Haspiel owned and operated Kicking Stones, Main Street, Margaretville, my favorite antique store and Friday afternoon haunt. We three became fast friends.

Inverna became the director of the Catskill Center’s Erpf Gallery, Arkville, and its Platte Clove residency and exhibited at the Hunting Tavern Museum. She and Barbara strongly urged me to buy my building in Andes at 49 Main Street, and open Chace-Randall Gallery. Having served as director of INTAR Gallery in NYC, (recognized as one of the top 15 galleries in the nation for 7 years under her direction), Inverna generously became my mentor. She still is—only by telephone now, rather than long, upper front porch lunches. She has given Chace-Randall Gallery exclusive representation of her work.

Inverna Lockpez, once the glamorous clamor surrounding Cuba, My Revolution has quieted, will return to her Florida studio and her true art, her story told. We plan a 2012 exhibition at Chace-Randall: Birds.

In Inverna, Andes has yet another star of whom to be proud.~