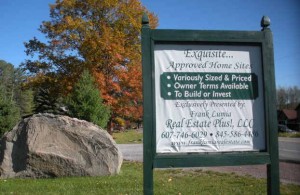 The intriguing sign at the foot of Palmer Hill: EXQUISITE APPROVED HOME SITES excites imagination and invites inquiry. I approached co-owner, Michael Eliash, Jr., with a raised eyebrow, “What’s up?” His eyes sparkled as he eagerly described his project.

The newest Andes development boasts a well-graded town-compliant road winding up through 12 sub-divisions ranging from 5 to 23 acres. Short driveways leave buyers free to decide where to site their houses. Electric and cable lines are buried and ready for connection. The road will be maintained by the Town as soon as three houses are built.

The developers, Mike Eliash and William (Bill) Doremus, bought the 159-acre Sheldon Ackerley farm from Eric Wedemeyer, mapped out the subdivisions and secured the necessary permits from the Andes Planning Board, DEP, DOT, and the Army Corps of Engineers.

Mike reserved a choice sweep of 28 acres at the top for himself and his wife, Lauren. They plan to build their dream house there soon.

To follow the partners’ path from Long Island to Andes, start with the flooding of Shavertown beneath the reservoir.  That drove Shavertown resident Bill Elwood to Lincoln Welding School and to work with a firm on Long Island. He invited colleagues from his job, Mike Eliash, Sr, and Ed Wagner, to go camping on Beech Hill. They loved the country so much that Mike bought some Beech Hill property from George Hoag (Alice Jacobson’s father.) Mike, Jr. spent childhood weekends and summers there and worked on a farm as a teenager. He was grateful to inherit his father’s land.

He, in turn, introduced his boss, Bill Doremus, to Andes. Bill, smitten, suggested they buy some land together. Mike eagerly agreed. Given its location, they plan to call the new development “Palmer Hill.”  From the wooded slopes you glimpse the Bryant Brook valley, the hill opposite ablaze with fall color, the brook sparkling as it darts from copse to copse. Sites higher up open to the high Catskill peaks. Stone walls curve between woods and meadow, now a carpet of russet ferns. At the graveled roundabout, you can imagine the pond for swimming and skating envisioned by Lauren Eliash already peopled with future residents. The buyers of these pleasant places will be free to form a homeowners association or not, as they please.

“Palmer Hill” offers privacy on a beautiful hillside and proximity to the main road. Like the other Andes developments, it bids fair to attract good neighbors. ~