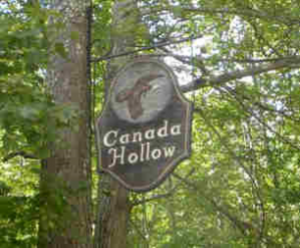 In early September, two of your reporters had the great pleasure of turning off Route 28 and driving deep into Canada Hollow to the end of the town road where a circular private drive winds through the properties of the Canada Hollow Homeowners Association. We stopped at the home of the developer and his wife, Lew and Karen Kolar. 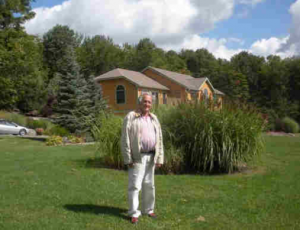 Lew Kolar in front of his Canada Hollow home.

In 1979, Lew bought three farms from Frances T. Polhill, “A nice lady,” 470 acres of steep, rocky Catskill land with spectacular views of the high peaks and plentiful water for ponds. Lew cut out about 15 acres for himself chosen for the view (Think top of Palmer Hill.) and a marsh which John LaFever, Sr. carved into a deep fishing pond fed by an inlet cascading down the bank, leveling off enough for trout to spawn in its shallows. (Lew caught a 21 inch rainbow from this pond.)

The other attraction was an upland plateau where he could already picture his dream house. He began at once to landscape his terrain. He strongly believes that, “People can enhance their environment,” and the artistry with which he has gardened his own land and designed the rest of the Canada Hollow development proves him right.

And how did Lew Kolar, born in Brooklyn and raised on a dairy farm near Whitney Point, come to be in Andes?

On the way to a B.S. in Business Economics at Cornell University, he did research for a professor who was surveying the attitudes of farmers.  He chose Lew, so charming and out-going and a farm insider, to question farmers who had refused to talk to other researchers.  The young man found himself staying at the Andes Hotel and marveling at the beauty of the surrounding hills.

After graduation he went to work for the Peoples National Bank which was bought by the National Bank and Trust Company of Norwich (NBT). When he heard that NBT was opening a branch in Margaretville, he let it be known that he was interested. In the ensuing years he has been an NBT officer in Margaretville, Gloversville and Norwich, but always kept coming back to “putter,” as he puts it, on Canada Hollow, finally building his dream house on his exquisitely landscaped land in 2002-3. The Kolar’s 4 daughters and their families love to visit.

Lew subdivided the remaining 455 acres, selecting the lots in accordance with his own priorities: land, view, and water. He included clauses in the deeds to exclude unregistered vehicles and junk yards and require minimum square footage for residences. The homeowners association maintains, plows and mows the private road.

Lew took us for a drive along this gravel thoroughfare which snakes through deep woods and opens to glimpses of the distant hills. He showed us the faint signs of an old trail over the mountain to Dingle Hill. We passed attractive entrances to lovely homes, many invisible from their neighbors. Of the 17 property owners, 14 have houses and 4 (soon-to-be 5) are permanent residents.

Most homes are nestled harmoniously into their well-designed settings. A couple are still under construction. In one of these, Robbie Weaver, a Delhi mason, was artfully building a stone fireplace. And although Lew Kolar is his own gardener, these properties make work for many local landscapers and other tradespeople year-around. Built up slowly, over 30 years, Canada Hollow attests to Lew’s philosophy of  “sound development.”

Lew drove us back to his home, to the new wildflower garden by the pond and the woodland slope above the house where enormous trees from the original orchard laden with apples stand among sturdy evergreens and graceful willows. In the kitchen which he designed (Lew is a hands-on-guy in everything he does.), hangs a sign: “Live well. Laugh Often. Love Much.” 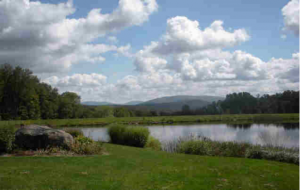 One of the lakes that graces the properties in Canada Hollow.

Lew looked thoughtful, “Well it’s true. But the most important thing is love. If you love, you will live well.” ~