It seems like an anomaly, right? An outgoing man, a retired research cell biologist who has lived and worked in San Francisco and Boston, moves alone to a rental house in Andes hamlet and likes it! But if you listen to Daniel Friend’s story it all makes sense.

Dan was raised in Passaic, New Jersey and later returned there after retirement, one of four children whose parents had emigrated from Russia. But during his entire childhood, from 1934-1948, he spent early June to late September in Fleischmanns where his father ran a hotel/boarding house. One of young Dan’s regular chores was to walk to the Thompson Farm near Redkill Road for milk. This country living experience cemented his love for these hills and nature in general. So, no matter where he’s lived– interspersed with serving in the Army in Korea, attending NYU Downstate Medical School and receiving his M.D., his residency at Boston City Hospital, and a long career as an academic pathologist at UCSF Medical School in San Francisco as well as postdoctoral fellowships at Harvard Medical School and Brigham and Women’s Hospital in Boston–he has made it a point to return every couple of years to the Catskills. In 2006 he was visiting Andes with family (he liked to breakfast at Slow Down Café) and taking a walk in Ballantine Park when he noticed a “for rent” sign at the nearby former Ben Balcom house, now owned by Maija and Albion Butters. That it had a huge rear ground-floor room that could be his painting studio cinched the deal.

Dan began painting while a medical student. During his medical residency and while a research fellow at Harvard Medical School he painted several oils. But that part of his life grew dormant for many years when marrying, raising three children and working in his profession; he has been sole or co-author on over 150 original research papers and book chapters. 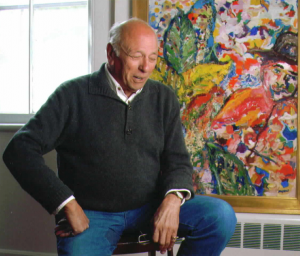 Dan Friend with one of his paintings

Dan, dubbed a “folk expressionist” while showing some of his paintings at the Viviana Hansen Gallery in Delhi a couple of years ago, began painting in earnest in 1998. His lower Main Street home, which we toured after tea and tasty snacks, must have 100 of his more than 200 oil paintings on display. Some say his work brings to mind the Fauvists with their strong colors and painterly textures dominating the impressionistic renderings of local landscapes, farm scenes and portraits. Dan says that he feels most alive when he paints, which is usually by natural light, and while listening to Handel, Bach, or maybe Salsa. This is clearly the work he is fully immersed in at this stage of his life.

The future? From the sanctuary of his Andes home Dan embarks on travel with friends, flies out for visits with his son, Jeremy, who is pursuing a PhD. in Berkeley, his daughter, Galen, who is a psychologist and massage therapist in the East Bay area, and his son, Ned, who works for Microsoft in Seattle. Perhaps his new granddaughter will draw him in time to the West Coast, or he will follow his inclinations to live in a more remote location where he can connect intensely with nature.

Meanwhile he enjoys living in Andes, appreciating the genuineness of this place. He likes that he can walk to the Post Office where he has a mailbox, being a regular at Woody’s, and having easy access to Bobcat which he calls his church. He and George Ballantine, whose art he admires deeply, have bonded over their shared passions for painting and nature.

One project in particular bridges his scientific and aesthetic enthusiasms. In his exploration of the electron microscope employing the complex freeze fracture technique, Dan would view images of tissues, cells and lipid droplets magnified up to two million times and be awed by their revealed beauty. He captured the images on glass plates and gathered them through the years, wanting to share the wonder of nature and the joy of discovery. In 2007, he published a book of electron micrographs called The Pulse of Creation. His daughter recorded her responses evoked by the photographs she selected for the book. Prints from this collection will be shown at the Old Bank Gallery of the Roxbury Arts Group in August.

If you haven’t met Dan, be sure you do. He is a congenial and unassuming guy who would probably have you overlook his accomplishments and just enjoy a conversation. What a positive and welcome presence he is to our hamlet.~