From March 1910 issues of  The Andes Recorder

Culled by Judy Garrison With commentary by Jim Andrews

The Y.M.C.A. convention opens this (Friday) evening with a banquet at Union Hall—Rev. Bookhout, toastmaster and such speakers as Dimmick, Bruce, Dowie. Saturday sessions in M.E. Church. Sabbath at 10 a.m. union service U.P. Church, and 2:30 men and older boys; boys at M.E. In evening union services M.E. church. The public is cordially invited to attend all sessions.

Jim Andrews:  The Young Men’s Christian Association — the forerunner of the YMCA clubs of today — held a convention in Andes with the kick off being held on the second floor of Union Hall (now Tin Horn and Alfalfa’s, the second floor space being occupied by Tay Home). It is interesting to note that the services were held jointly with the two local churches working together in this endeavor. These same two churches (Presbyterian and Methodist) still work together and now participate in “5th Sunday Ecumenical Worship” with Cabin Hill and Bovina. The photo below shows the second floor of Union Hall set up and decorated for the dinner. Whether or not this is the same convention or another similar one is unknown. This is one of the few (or only) existing pictures of the interior of the building when it was Union Hall. 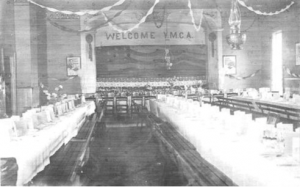 E.J. Turnbull is having the barn on the old hotel lot fitted up and will use it for lumber and cement.

Charles Muir is cleaning up and drawing away the stone from the cellar of the old Union hotel preparatory to excavating for the foundation for E.J. Turnbull’s new hardware store.

Work was begun Tuesday on Alex Fowler’s new house on the old hotel lot and the frame is up. Jas. L. Coulter has the contract.

The Andes Union Hotel occupied the lot now partially vacant adjacent to the stoplight on the corner of Main and Delaware Avenue. It had originally been Hilton’s Hotel and was the downrenters’ headquarters during the Anti-Rent Wars of the 1840’s. Its frame was the remains of the original double log tavern. This building burned to the ground in August of 1896. It’s interesting to note that this lot sat vacant with, apparently, the remains of the hotel in the cellar for 14 years when, according to these news items, it was cleaned up and graded for new construction. E.J. Turnbull built a concrete block hardware store on the lower half of the lot and Alex Fowler built his new residence on the upper half of the lot. In 1923, the hardware store, now the property of C. W. Hulbert, burned along with the adjacent general store of W. C. Oliver and the residence of George Marx. The fire started with a massive explosion (the cause of which was never determined) in the Oliver store which blew the plate glass windows out the front across the street onto Delaware Avenue) and quickly spread to the other buildings. The Fowler house, now owned by George Polley, was damaged in the fire but was able to be saved.

The hardware store was rebuilt with the identical design and served as both hardware store and the First National Bank of Andes, which then moved from the Ballantine Bank building on Upper Main Street. This building was occupied until 1976 when the bank moved to its present location and the building deteriorated to the point of demolition. The lot is again vacant as it was 100 years ago. 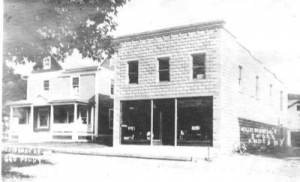 The picture, taken about 1918, shows the original E.J. Turnbull hardware store before the fire and the Fowler house, then owned by George Polley. Unfortunately, Alex Fowler, who had always rented living quarters, died very shortly after moving into his new house. Anecdotally, even though the new house was built with a bathroom, Mrs. Fowler insisted that an outhouse be used, since she could not abide the idea of using indoor plumbing!!!