A FITTING START TO THE SEASON – January 2010

Think about the Christmas season and no doubt the images and feelings that are evoked will include family and friends, the baby Jesus, Santa Claus, music, stories, food, children, gift giving, sharing, snow, lights and joy. How fitting, then, that the annual Andes tree lighting ceremony and associated events included all of these things and more.

Hearty carolers filled the afternoon air with son, despite the falling snow.

Members of the Andes Community Storytelling Troupe, under the direction of Laurie McIntosh, met at the Public Library to share seasonal stories. In front of a packed crowd, Courtney Sage, Carol Johnson and McIntosh spun tales that captured their audience’s imaginations. This talented group of storytellers has grown to become a multi-generational activity. 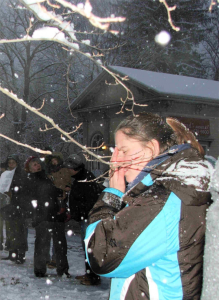 The first snow storm of the season covered the area with 5 or 6 inches of fluffy white foam, the perfect accompaniment to the day’s festivities. While slick roads may have kept some from venturing out, dozens of hearty souls gathered at Bohlmann Park in front of the traditional manger scene. The Norway spruce by the brook suddenly burst with twinkling lights, an annual miracle created by Jim and Mike Barrett. As the children literally threw themselves into enjoying the burgeoning blanket of whiteness, tumbling about and squealing in delight, carolers clutching printed pages of lyrics raised their voices in song led by master songsters Jim Andrews, Ron Guichard and Bill Piervincenzi. Jingle Bells and Silent Night and countless other holiday favorites, sometimes more than one at a time, rang out as the DOT’s huge snow plows passed by, the drivers confounded by the crowd spilling out into the roadway. Andes own Bill Drew, held up by icy roads himself, parted the ocean of participants as he trundled down the sidewalk on his snow blower to clear the snow and make the walkway safer for all. Greetings were shouted at him, and the singing went on. At one point, when it became apparent that Santa’s arrival by fire truck was delayed, it was suggested that the revelers could continue singing, or head into the warmth of the Library to await the jolly fellow’s arrival. “Keep singing,” the crowd responded, and another round or two of the songs began. When the fire truck with lights flashing arrived, Santa Claus immediately set to the task of greeting all the boys and girls, listening to their hopes and passing out candy canes.

Afterwards, it was on to the Hunting Tavern Museum where the Andes Society for History and Culture was hosting their annual holiday open house. An astonishing array of crock pots and slow cookers contained a rich assortment of delicious homemade soups, including tomato basil, clam chowder, Dutch pea, bean barley, chicken corn chowder and potato-ham, to name a few. The repast also included breads and crackers, wines, mulled cider and cookies. ASHC President Margaret Moshier and her helpers never stopped hustling about refilling pots, clearing away dishes and making sure their guests were well taken care of as they clustered at rows of tables in the meeting room or warmed themselves in front of the fires in the parlor and tavern.

During the evening, a small child became distraught upon finding that the candy cane Santa had given to him had broken. He was inconsolable as only a toddler can be. Seeing his distress, another guest offered the mint condition candy cane her grandchild had received. Amidst the festivity of the day, a bit of caring and sharing underlined the meaning of Christmas.

There was no way anyone attending these community events left without being engulfed by holiday spirit. Once again a small group of volunteers offered up to their friends and neighbors a very special treat. What a wonderful gift!   ~