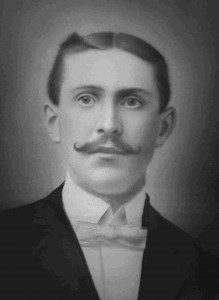 The Presbyterian Church of Andes celebrated 175 years of service this summer. To mark this milestone, it seems fitting to recognize the first fulltime minister of the Church, the Reverend James Laing. The following information comes from three different sources, the Delaware County, NY Genealogy and History site on the internet, the booklet produced by the Church for its 150th anniversary in 1984, researched and written by Jim Andrews, and the notes and family memories of Charles Robert Laing, a sixth generation Laing residing here in Andes.

James Laing was born in the highlands of Blairgowerie, Perthshire, Scotland in January of 1785. As a boy, he was trained as a weaver, and was so skilled at the trade that at age 16 he was awarded the prize of a silver watch for being the best worker at his factory. It is said to be the only watch he ever owned, and was passed down through his family for generations.

Despite his talent as a weaver, James decided to pursue a Gospel ministry. Educated in Edinburgh, he completed his studies at the University of Glasgow. On April 12, 1825, at the age of 39, he received his license and ordination from the Relief Presbytery of Glasgow. Later that year he booked passage to Canada on the brigantine Cherub at the port in Greenock, Scotland, paying 30 guineas as fare. The Cherub sailed on August 21 and arrived at the Port of Quebec on October 3.

Nothing seems to be known of his time in Canada, but Reverend Laing reputedly arrived in the United States in 1828 “bearing with him from men of eminence in the church of the highest testimonies to his native talents, literary attainments, exemplary piety, and ability as a preacher,” as stated in the Church booklet.

The move to our community occurred after the church petitioned the Saratoga Presbytery to send Reverend Laing to Andes. He preached his first sermon here on June 15, 1834 and on December 12, 1838 he was installed as the pastor of both the Andes congregation as well as that of the Cabin Hill Church. Known as a mild-mannered gentleman with a peaceable disposition, he dedicated himself to his congregation for more then 2 decades. During the 21st year of his ministry in Andes, the Reverend fell ill with congestion of the lungs and within days had passed away, on November 18, 1858.

There are still a handful of descendents of the Reverend James Laing living in Andes, including Charles Robert (Robbie) Laing, the last carrying the Laing name, Roxanne Laing Finkle, Janis Lynn Jacques, Kim Brown and Joanne Boerner. Robbie, a former builder and active country musician, traces his heritage from the Reverend through William C. Laing. William’s son James A. Laing (Robbie’s great grandfather) ran a men’s clothing store in Delhi. Charles W. Laing, Robbie’s grandfather and son of James A., was a horse trainer who worked at the Gerry estate. And Robbie’s father, Charles B. Laing, served in the Army Air Force during World War II. Robbie says of his notable ancestor, “He was very well educated and a prolific writer. But inexplicably none of his memoirs or writings have ever been found or at least made available.” Robbie goes on to add “I am extremely proud to be the sixth generation of Laings to reside in Andes, but prouder still of how that gentle God-fearing man dedicated his life to helping the many people of Andes through their trials and tribulations in those early days to find spiritual salvation in their Lord.” ~