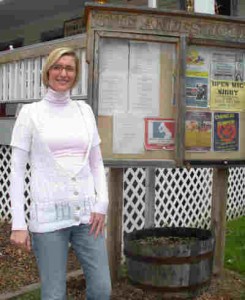 The roster of events booked at The Andes Hotel by co-owner Sally O’Neill is truly astounding. Folks can be excused for scratching their heads wondering how the Hotel is able to attract an audience, often sold-out, for so many events. Diversity and widespread publicity are key. Sally does extensive on-line promotion, as well as print and radio ads–colorful, professional and quite hard to resist—gearing the advertising to appeal to the particular constituency for the entertainment. (Sally also represents the glue and the follow through for the Andes Ad Group, a consortium of tourism businesses, in their promotions of Andes holiday and special events, in particular.)

Home Grown: Grass roots activities like the popular dart, pool and horseshoe leagues organized by Bill Day are given a welcoming home by the Hotel. Then there is the Hotel’s First Thursday Karaoke Night at 7 p.m. in the Tavern (no cover), to which Joanne and Ed Callahan lend their spirited expertise. The newer monthly Open Mic Nite at 7 (6:30 to register), also held in the Tavern, is an ideal spot for aspiring musical and comedy talents. On Mixology Mondays with Rachel, you can enjoy the freshly originated and mixed up cocktail concoctions each week, perfect as an accompaniment to always innovative and delicious small plate tapas prepared by Chef Ed on Monday evenings.

What was New in 2008 and 2009?: American Craft Beer Festival in June, a Rockin’ Reggae Pig Roast, Oktoberfest and Cans ‘n’ Clams, all in the Summer Shack accompanied by a fitting complement of live music. Irresistible fun that rocks Main Street! Then there are the almost weekly band performances, from classic rock, to country, alternative and pop.

Coming up in December: Tandy, for a first-time Hotel appearance (no cover). Tandy’s frontman Mike Ferrio writes memorable, understated, image-filled narratives of blue-collar life, his vocals casual and laid-back. The group’s hit song “Home” was featured on “Grey’s Anatomy” in January 2008. They are huge in Europe, by the way. Blues Maneuver, with a versatile repertoire of classic Motown, swing, blues, R&B and oldies,–many people’s favorite Catskill Mountain band–is playing at the Hotel’s New Year’s Eve Bash, which includes a three-course dinner. The New Year’s Day Jazz Brunch, from 11 a.m. to 3 p.m., features Patty & the Mygrain.

Coming up in January: On the 9th the Hotel will inaugurate film screenings in the yellow room. The first film on the roster is Dorothy Lyman’s newest, Split Ends. It is a story about a little town being threatened with extinction. An international developer is preparing to raze the 19th century storefronts and replace the Old Town with a massive mall complex. Pass the popcorn!

On the Boards for 2010: Trivia Nights, with folks working in teams, to be held in the Tavern. A Sunday Gospel Group performance followed by brunch. A Chili Cook Off in the Summer Shack, designed to attract regional fire departments among others. Sally and Ed envision it as a benefit event, with proceeds donated to a local project. Two Many Divas, a cabaret act featuring hot musical stylings of the 40’s through 70’s will be another new departure for the Hotel.

Don’t try to commit all this to memory! Check the outdoor bulletin board or click on the events on the Hotel website: www.andeshotel.com. Best yet, sign up on their website to receive a weekly email announcement of upcoming events. We are so lucky to have all this happening entertainment (and great food, let’s not forget), in our little town. Thanks Sally and Ed for your imagination, initiative and old-fashioned hard work!~