ADVENTURES UP A TREE – Opening Day of Bow Season 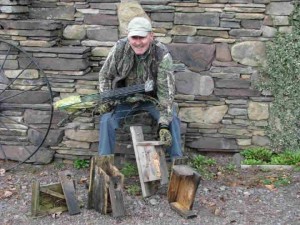 The morning of opening day emerged clear, cool with the threat of rain and snow in the afternoon. Undaunted, I packed my thermos of hot coffee, a peanut butter and jelly sandwich and my bow and headed up the mountain to my favorite tree stand. Why is it my favorite? Because from it I can view a vast area and the many game trails that converge here. The reason for this convergence is because usually there are a great number of acorns cast by the enormous red oaks, a very important food source for much of our local wildlife. I perch myself about twenty feet above ground level. No acorns this year but, I love this spot for its great wildlife viewing potential.

Seven-thirty: The sun is trying to emerge still covered with thin clouds. It is strangely silent, the only sound that of a distant crow. There is nothing, no birds, no squirrels, no nothing. The forest floor is damp, meaning even if there is a critter it will approach in silence. Knowing this, I must constantly, slowly twist and turn my head so as not to be surprised. There is no movement, the scene ominously quiet.

Eight-ten: Movement on my right. There is a doe moving along a trail that if it continues will offer me a shot. I very slowly and quietly remove my bow from the hook upon which it is hanging. To do this right you can only move when the deer is moving or looking in another direction. I am ready. Take note: I am only interested in taking a doe as there are so few bucks around and to control the population the removal of some does is the best management tool. As it gets closer I notice two small spikes between its ears and I hang up the bow. He comes to about twenty yards and gives me what would be a perfect shot. He now appears to be about to bed down and I don’t want him hanging around as he would be a second set of eyes to catch my movement if a second was to come along. To prevent this I loudly tell him to move on which he does with tail bobbing out of sight.

The eerie silence and lack of anything alive continues until nine-fifteen. To break the spell I reach for my coffee thermos when a large bear catches my attention. He or she, I will call it he, is out about fifty yards and looks to be in the 250-300 lb. range, a good sized bear. The trajectory that he was on, if continued, would put him right out in front of me at about twenty yards, a perfect shot. A bear had pilfered seven of my bluebird boxes and had ravaged much of the corn field planted across the road, so bear meat was to be had if made available. Of course this guy may not have been the culprit, but at the time it does not matter. At about twenty-five yards he changes course and heads directly at my tree. As he approaches, he looks up at me and our eyes make contact twice, once at about fifteen yards and again at about eight yards. Bears have poor eyesight but an extremely strong sense of smell. It crosses my mind only briefly that maybe what he thinks is up the tree is another bear and he is about to be aggressively territorial. Now directly below me, he senses danger as he sniffs the trekking pole that I use for balance as I wend my way along the hill and have left mistakenly at the base of the tree. Usually I take this up the tree with me to eliminate any source of human odor on the ground. He does not wheel around and go into quick flight as a deer would under the same conditions but, slowly turns and lumbers off. I quickly draw my bow with great difficulty as I have gotten quite stiff and do not sight properly. The released arrow hits the ground right next to him. He lunges forward and disappears into a low canopy of trees that obscures his further flight. I immediately hang the bow, retrieve my binoculars, sight where I last saw him and realize that I can see nothing as I am shaking so hard. I try to use them to observe the arrow sticking in the ground to see if there is any blood or hair just in case I did hit him. I can’t see a thing since I’m still shaking like a leaf. Time for coffee and some calming. After about ten minutes or so I am able to hold the binoculars steady and confirm that the arrow has no blood or hair and there is no bear lying dead at least out as far as I can see.

Contemplating what has happened I realize how lucky I am in not getting him as the real work begins after the kill. I think how lucky for the bear, too. In my youth there would have been tears of frustration and now in my elder years, tears of satisfaction.

At about ten o’clock a huge flock of migrating warblers fill the black birch trees feeding on the seed pods. After they leave I am visited by a mixed flock of chickadees, tufted titmice, white breasted nuthatches, and a brown creeper. At eleven o’clock I am on my way out, when I walk up on a bobbing woodcock that seems to have no fear of me. Now how is that for a naturalist nut? No venison, no bear meat, yet a wonderful day! ~