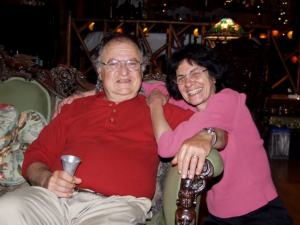 Four-year-old Bill Piervincenzi’s mother used to ask him to run to the vacant lot down the block in Bay Ridge, Brooklyn to call his grandfather home for supper from his game of boccie or cards with his Italian immigrant friends. Soon thereafter, Attilio and Florence (born “Filippa” in Messina, Sicily, but renamed on Ellis Island) Piervincenzi moved their two boys and two girls, as well as Aunt Gilda who always lived a few doors away, to Queens Village, a semi-rural section near the Nassau County line.

Queens Village (think opening scenes of “All in the Family”) featured identical three-story houses on 30 x 100 foot lots, postage stamp front lawns, back yards planted in tomatoes. Bill reveled in the woods and mixture of Italian, Irish and German families. He joined the Geary Gang and defended their turf against all comers. When he was 8½, his father, perhaps alarmed by gang activity, spent his last dime to buy a house on Long Island, a barracks-like house in a Levittown-style enclave. Bill thought he “had died and gone to heaven.” Such a peaceful place! All Jewish except for them (and Aunt Gilda across the street.) Peaceful because, Bill notes, Jewish mothers use guilt instead of corporal punishment, in Bill’s case the wooden spoon, his mother’s weapon of choice.

And here were his first loves: woods, streams, swamps and ponds where he could hike, swim, and fish to his heart’s content. He marvels at the freedom they had. They dashed out after breakfast not to be seen until supper. They slung rope swings over swimming holes and explored drainage pipes with plumbers’ candles. They jumped on bikes to go clamming and crabbing on the South Shore and filled his newsboy’s canvas bag with flounder.  Yet little by little, every inch was paved or roofed over or filled in for parks and ball fields which held no interest for a boy like Bill.

In high school, Bill met Edna Schweizer (called Eddie) a slender, spirited, talented girl, whose Swiss-Welsh-Mohawk father was a steeplechase jockey at Belmont Park race track. Her Italian mother, like Bill’s, was a homemaker. Eddie majored in Secretarial Science and became a bookkeeper on graduation. She spent her first earnings on a brand new Ford convertible.

He managed only three semesters of veterinary science, preferring to fish the muddy rivers and hunt for pheasant. Before he could be drafted, Bill enlisted in the Army. He and Eddie were married forty-seven years ago on an overnight pass in San Antonio, Texas. He served two years as a medic in the airborne infantry in Germany.

Back home, he studied biology at Nassau Community College on the G.I. Bill. After graduating from Adelphi Marine Institute he returned to Nassau Community College for a thirty-year career teaching biology. He and Eddie lived in West Hempstead where they raised young Bill and two daughters, Gina and Andrea. Eddie returned to work when Andrea reached school age. A talented craftswoman, she found that she could do any handwork she saw, analyzing its construction in an instant and duplicating and elaborating on it herself.

During a separation, Bill fathered another son, Adam, before the couple reunited.

How does a couple, fully engaged on Long Island, come to live in Andes? In 1973, Bill contacted a high school friend, Andes real estate mogul Eric Wedemeyer, who sold him 19 acres on Palmer Hill. The family camped weekends and summers, gradually building their house. In 1998, they retired, moved here permanently, and plunged into community activity.

Eddie is a founding member of the Stitch Witches where her skills are legendary. She served long and faithfully as treasurer of the Society of History and Culture. (ASHC) Both Piervincenzis give unstintingly to events at the Andes Public Library. Bill has donated his time as a Board member of the Andes Central School and ASHC and currently at the Margaretville Hospital. It was his impetus that started the paper you are reading. Any wonder it is called the Andes GAZETTE? He dreams of finally restoring the old depot, writes grants for concerts at the Pleasant Valley Meeting Hall, leads nature walks, and is proud to be one of the “Grumpy Old Men.” A writer, leader of songs at the annual Tree Lighting, “Chef Gugliemo” whose demonstrations of Italian specialties are always SRO, and a spark at many gatherings, Bill still finds time to care for two Arabian rescue horses. The Piervincenzi menagerie has, over the years, included five donkeys, a flock of chickens and a beloved Newfoundland known far and wide as “Chewy.”

It is hard to imagine Andes without Bill and Eddie. Luckily, we don’t have to. ~