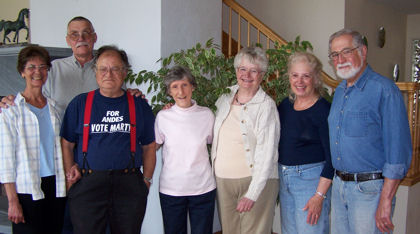 By Barbara MellonSpirited, often chaotic conversation was the order of the day as Doris and Frank Hartung hosted the original and current editorial staffs of the Andes Gazette at a 10th anniversary celebration to share experiences, anecdotes and ideas. The excitement and enthusiasm evident as the attendees chattered with and over each other made it easy to see how this volunteer-run effort has continued for a decade.

Over an incredibly delicious chocolate and custard cake, the conversation around the Hartung’s table wove around what the Gazette has been and what it could be. During the early years, production occurred at the homes of those involved, and, as stated by Wilma Mazo, were “all about eating.” Folding parties, where the volunteers got together to assemble the printed pages into booklets, were working feasts. Despite the camaraderie, all keenly remember the amount of work involved, and most of the original staff admitted they had never expected the Gazette to last as long as it has.

Bill Piervincenzi told the assembled group that the Gazette has improved a lot since its inception, while still holding to the original focus of making Andes a destination, a place where people want to live, work or visit. Interviews of residents for columns such as “We Applaud” and “Have You Met My Friend” were intended to give people a sense of worth. Dozens of Andes residents and their accomplishments have been covered in this manner.

The process of getting the Gazette out has not been uneventful. A change of a single letter by the printers turned the word “farrier” into “furrier.” Lest the hardworking specialist in equine hoof care being mentioned be hounded by animal activists or women seeking fur coats, the staffers had to manually change the “u” to an “a” in each of the hundreds of copies printed.

The first issue of the Gazette was published in June 1999, with its mission printed on the front page:
“Welcome to our inaugural edition. The Andes Gazette is an outgrowth of the Community Empowerment Initiative, sponsored by the Catskill Center for Conservation. We are a monthly publication operating as a community service. We will serve as an organ of communication for all Andes’ residents, both full and part-time. We want all Andes’ residents to be aware of the community service efforts of their neighbors and to encourage involvement in projects that will benefit us all.

We believe our message will be a positive one, stressing all the exciting, good things that are going on in Andes now. We will report on the efforts of town and village government, as well as cultural, historical, environmental and economic activities.

The Andes Gazette will rely on its readers for news of positive efforts of individuals and groups in our community. If you want to have your group’s efforts highlighted in the Gazette, contact us by telephone or mail, and we will gladly publish the information.
We sincerely hope our publication will result in the facilitation of ongoing projects as well as the generation of new and exciting ones that will contribute to the revitalization of our community.”

The succeeding decade has seen a number of changes in the Gazette, from the size (that original issue consisted of a mere 4 pages) to the staff to the recent presence on the Internet. A couple of issues were printed in color, but the cost was prohibitive and some were printed on colored paper for emphasis or holidays (red proved difficult to read, but yellow really stood out). Layout was handled solely by volunteers (Doris Hartung, with occasional help from Eddie Piervincenzi, personally typed the articles for 39 issues into her computer so she could arrange the pages), then partially by the printers, and later (after the printer’s building in Walton was heavily damaged in the 2006 flood) the job came back to the Gazette staff. Originally, printed pages were taken to Margaretville, Oneonta or Walton for photocopying; later, layout sketches, photographs and diskettes were used to get the content to the printer. Today, everything is simply emailed, saving time and gas for volunteer staffers.

Many of the changes in Andes during the last ten years are chronicled on the Gazette’s pages. Volume 1 Number 1 contained a list of area businesses and services. The efforts of the Library Committee, the Andes Foot Trail Committee, the Main Street Alliance, the Andes Community Empowerment Initiative, the Explorers and Heartworks Plus of Delaware County were highlighted. How interesting to notice the evolution of our community, as evident by businesses still here and those no longer around, and the progress, or lack of progress, of the projects and initiatives embarked upon over the years.

The latest advancement for the Gazette has been the launch of its website at www.andesgazette.net. Currently all 2008 and 2009 issues, along with the June 1999 edition, are available for viewing. Our goal is to have all back issues available online before the end of this year. Printed copies of all issues are also available in the Local History section of the Andes Public Library.
Look for a full history of the Gazette online later this year. We hope to chronicle the efforts of those who have made the Andes Gazette a success over the past decade. For now, we want to thank our readers, subscribers, editors, contributors and volunteers for their support. Here’s to another 10 years. ~