SUGAR MAPLES – FROM SAP TO SYRUP 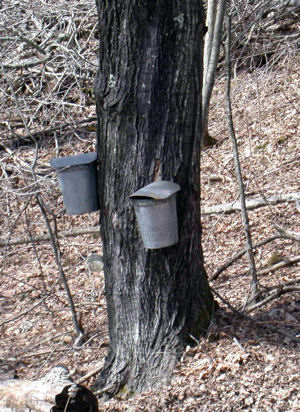 Making maple syrup is a long, drawn out process, time-consuming and labor intensive, from tapping the trees to boiling down the sap to remove water until the desired thickness for syrup is achieved. Over the years, methods and equipment were developed that made producing maple syrup more efficient.

When Europeans settled Eastern Canada, they noticed the Indians using a dark sugar with a distinct taste, different from the sugar they were accustomed to. The Indians taught the settlers how to collect sap and how to make sugar and syrup. The settlers used an auger to bore holes into the trees, wooden spouts were inserted in the hole and wooden buckets were used to collect sap. The sap was boiled down in iron kettles. For over 200 years, more sugar than syrup was made since the syrup spoiled after a time, while the sugar would keep indefinitely. During the 19th century, foundries began making metal sap buckets as well as cans that could be used to preserve syrup for longer periods. Plastic tubing for use in gathering sap was invented in 1950. Because of the oil crisis at that time, the United States and Canadian Agriculture Departments focused on more efficient production. Enclosed evaporators were designed; hydrometers (instead of the ‘eyeball’ or ‘jelly testing’ methods) were used to determine when the syrup was ready. Now a gauge attached to the evaporator pan is used instead of the hydrometer. 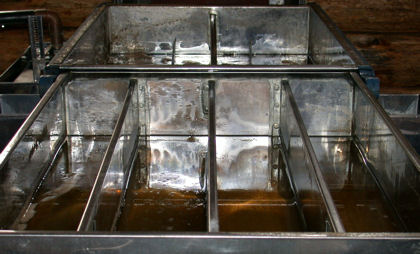 Evaporator pans in which the sap is processed

For the last several weeks, I’ve been spending time at the sap house (pictured in the April Gazette) on Fall Clove Road, built by Betty Little’s family, son John, daughter Jean, son-in-law Jim Bright, and grandchildren Ryan and Beth. The Littles use a combination of the old and new in their maple syrup operation. Tapping the trees usually starts in late February or early March, depending on the temperature, which should be below 32° during the night and over 32° during the day. Sap runs the best on sunny days. Mature maple trees from 30 to 40 years old and at least 12″ in diameter are the best to tap. The same trees can be tapped for many years. After the trees are selected, holes are drilled at a slightly upward angle, and metal taps are inserted. Covered metal buckets are hung from the taps; the covers keep twigs and debris out of the sap. The sap is collected each day using a tractor-drawn wagon carrying a holding tank, brought back to the firebox. Then the sap is heated to boiling, removing the water content in the form of steam. While boiling, the sap passes through evaporator pans to the last one with the attached gauge. When the gauge reads #7, the syrup is ready to be ‘drawn off’ and filtered to remove sugar sand and other impurities. Syrup is stored in old fashioned milk cans until all the sap is boiled down and ‘drawn off’. The finished maple syrup is then reheated, run through a filter again, and put into syrup jugs or canning jars and sealed.

All this was done on weekends, after work, school and other obligations. John, Jean, Jim, and Betty headed the syrup making operation with the help of Cody and Mariah Ruff. Friends, neighbors and passers-by were always welcomed to drop in to help, watch and socialize. During the bottling and clean up stage all helpers and visitors were served waffles and syrup in the sap house, thanks to John, Betty, Jean and Jim. ~