DIAMOND IN THE ROUGH 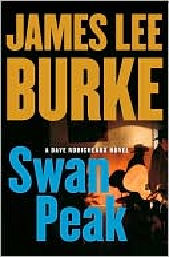 The detective and his stalwart sidekick are familiar characters to those who like a juicy murder mystery. But Dave Robicheaux and Cletus Purcell are something special. Burke’s main character Dave is not a flat caricature but a developed personality who rings true, mainly because, in addition to all of his strengths, Dave has weaknesses, not least of all his constant battle with alcoholism. He is also well read (the novel is sprinkled liberally with references to great works of literature), deep into his faith, an environmentalist, loving husband, loyal and good friend, and somewhat of a gloomy and contemplative philosopher.

He is also something of a superego to Clete’s id, trying to protect him from himself, seeing him on a “collision course with a train.” But of the two of them, this reader likes bad boy Clete best. No sermonizing, no long dissertations on morality, just plain old Clete who loves his booze and his women but who is also an insomniac visited at night by visions of Bed Check Charlie, the symbol of all the fear Clete remembers from Vietnam. But he himself is quite prone to violence, and so he is his own worst enemy. Throughout all the Robicheaux novels, but particularly this one, Dave attempts to look after Clete, trying to keep him from getting into situations that can only be bad, both for Clete and the people he clashes with, but also for Dave, a difficult thing to do since Clete just loves to shoot himself in the foot. But what has always been missing until this novel is more about Clete: who he is, where he came from, what makes him the way that he is. In this book we find out.

Clete, Dave and Dave’s wife Molly, haunted by the devastation of Hurricane Katrina, the men scarred as well by their Vietnam experiences and the horrible things they’ve seen in their work, are in Montana on a fishing holiday in an attempt to find some peace. But even here there is no respite to be found when Clete, unknowingly fishing on private property, is caught up by the minions of the Wellstone family. And here the coincidences begin, for Clete recognizes them from the Sally Dio crime family, Dio having ostensibly been killed in a plane crash that might have been caused by the sand Clete had poured into the gas tank.

But horrors mount. Two college kids are murdered and also a man and a woman. Dave works with the local sheriff to find the murderer while trying to keep Clete in line. Along the way, Dave and Clete come across many different people and are embroiled in the side plots surrounding them. All of these secondary characters have desperate backgrounds, and somehow they come together merging in or around the doings of the savage Wellstone brothers.

Yes, the book is full of coincidences that sometimes strain credulity. It also presents us with a paradox surrounding Clete-he is described as fat, sloppy and smelly, yet he manages to bed at least two young women who are also deeply entwined in the subplots that make the main plot even more intricate and sometimes farfetched. Be advised that the book is full of violence, incident piling up on incident that gives Dave more fodder for the mill in which he ponders the nature of life and non-negotiable death, good and evil. But, oh, can Burke write beautifully, especially when he describes his surroundings, the gorgeous landscape of the Bitterroot Valley. ~