Horse Ran Away
Saturday Dr. C.L. Wakeman’s horse ran away. He left it standing at Armstrong’s feed store at the depot and it started. In its run it collided with the lamp post at the John Wight house and put the lamp out of commission. It then brought up against a tree a few feet away and got free of the wagon, which was almost a total wreck. [Jim Andrews: I am not sure what this Armstrong’s feed store at the depot is all about. Armstrong’s feed and flour mill was located behind Hogan’s which is nowhere near the depot. The train was running in 1909. What may be referred to here is Armstrong’s feed storage which might have been somewhere around the depot. This would make more sense, too, since Jim Wight’s house is the former Dale Cole home on the Triangle. It would make sense that Dr. Wakeman’s horse could have been at the depot and run all the way to the Triangle and connected with the lamppost-and the old pictures do show a lamppost in front of that house.]

NOTE: This item and a recently contributed clipping by Linda Van Keuren of a July 12, 1957 Walton Reporter article on Dr. Wakeman’s death, led to the editors’ decision to feature Doc Wakeman in this issue. Below is an excerpt from the Reporter notice, interspersed with commentary by Jim Andrews. Jim is writing a short article about Dr. Wakeman’s house on Delaware Avenue and its fate which will appear in the spring Andes Society for History and Culture newsletter..

Dr. Wakeman Dies in Hancock Hospital
Cared for People of Andes for 37 Years

Dr. Wakeman cared for his patients in the “horse and buggy days” when a doctor needed not only a steady hand but a strong one to surmount the difficulties of calling upon the sick in back areas of this large county. 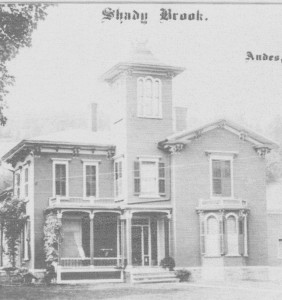 In 1952 the people of Andes and Shavertown gave Dr. Wakeman a testimonial reception with more than 300 persons on hand to pay their respects to the man who gave his life in errands of mercy. [JA: There was a large parade led by the first child Dr. Wakeman had delivered in Andes along with as many of “his children” as were able to attend. There was also a formal ceremony honoring him with printed programs with his picture as handouts.].

At that time Dr. Wakeman, who had ministered to the medical needs of the community for 37 years, said, “Only those who have tried to follow a mountain road during a blizzard in the middle of the night with a kerosene lantern to guide the horse can understand what I’m saying.” He told the crowd that he was often forced to drop the lines and let the horse pick his own way through the drifts.

He remembered that when he was at the height of his career, neighbor women used to come in and care for the seriously ill. “Nowadays,” he said, “you’ve got to have a trained nurse and it costs $10 to $12 a day. Years ago, this service went without asking.” [JA: Two of the “nurses” I know of who served with Dr. Wakeman were Bertha Reynolds (Janis Reynolds’ mother) who had no formal medical training but who was willing to go with and was capable of assisting the good doctor with surgeries and other procedures. Janis has recounted times when Doc Wakeman would come to their house and say, “Bert, I need your help” and Bertha would drop what she was doing and go with him. The second being Grace Gladstone, Bud Gladstone’s grandmother and Walter Gladstone’s aunt, who did have formal nursing training and was mentioned in countless turn-of-the-century Andes Recorder articles detailing her assistance to Dr. Wakeman with the medical woes of Andes residents.]

Attesting to the high esteem in which Dr. Wakeman was held is the following from the week’s newsletter written by Leland Titch of Shavertown: “It was with great sorrow that this community learned of the passing last week of Dr. C. L. Wakeman of Hancock, formerly of Andes. Few of the young and middle aged of this community but were brought into the world by this doctor. And none of the older residents who do not feel they owe their lives and the lives of many of their loved ones at some time or other for his care from the ‘horse and buggy days’ until his retirement a short time ago.”~