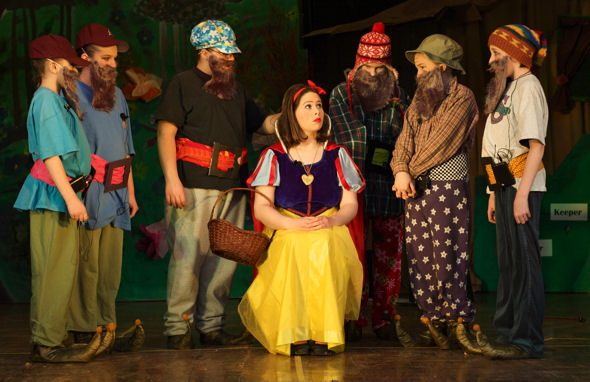 By Buffy CalvertAudiences, packed to the bleachers, applauded the actors in a zany, musical version of Snow White and the Seven Dwarfs directed by Tamara Snyder and Janice Armstrong on Friday and Saturday nights, March 6th and 7th at ACS. The players acted before stunning sets designed by Sharon Tucker, shifting from an impressive castle interior to a woodsy clearing for the dwarfs’ house. In costumes by Barbara Cole and Kathy Whitaker, were the masked, caped henchmen of the queen, James Litaker, Jr. and Ethan Berghammer, a bewigged courtier, Russell Koronowski, satin-gowned ladies-in-waiting (Kaitlin Mackay, Stephanie Fitzgerald, and Kelly Chadwell), an adorable Snow White, just as you remember her from Disney, played by Hattie Brown and an imperious, proud queen, by Hope Egnaczac. With all their palace intrigue, they proved a stark contrast to the little, homespun dwarfs, 5th graders Ariel Melvin, Rachel Sluiter, Rebecca Kole, Danny Ballard, Adriel Grapes and Laressa Tuch. Each dwarf portrayed a special trade or trait, not those you remember but quite new and whimsical, down to the very shy and speechless Mouse (Ms.Tuch).

Snow White’s Prince Charming, Gary Winghart, looked the part, and Jenna Weaver, as the Magic Mirror, brought down the house. In the second act, Alexandria Rezac crept on stage as the queen’s thoroughly wicked sister. It seemed impossible that our naïve and kind-hearted heroine could escape their machinations, but love conquered all and defeated the beautiful queen, amazingly transformed almost before our eyes to an ugly old hag, and her suddenly powerless sister.

A pit band, including Janice Armstrong, Marianne Schor, Rachel Andrews, Jerry Schor, and Tamara Snyder, introduced and accompanied the action. I didn’t let myself go near the refreshments sold by the Class of 2014, but was told they were phenomenal. Judging from the homemade brownie my seatmate brought me to savor later, they were as rich, delectable and fresh as the performance of the age-old fairy tale brought to life on stage. ~