There has been a lot of interest in the increasing population of coyotes in our area and in the Northeast in general. They now populate the whole area both rural and suburban excluding Long Island, and I predict that area will eventually host them. Wiley Coyote was named such for good reason; they are truly wiley and have the ability to travel surreptitiously and cover long distances in relatively short periods of time.

One made the headlines in the Outdoor News recently having been GPS/radio collared by a research team north of Oneonta in April of 2008 and caught by a Pennsylvania trapper near East Stroudsburg on January 8, 2009. This two-year old male coyote traveled over 150 miles and gave the researchers a detailed record of its movements over an eight- month period. One of the researchers commented, “The animal occasionally traveled for miles along highways before crossing them, perhaps because they were unfamiliar and appeared to present a danger. For several months, the coyote traveled between Interstate 88 and State Route 20 before it ventured across I-88. He bounced around like a pinball for six or eight months between these two roads, then eventually crossed I-88 and went south”.

The research team is from SUNY College of Environmental Science and Forestry, my old Alma Mater. Led by Dr. Jacqueline Frair, it also includes a couple of graduate students. The study covers two counties, Steuben and Otsego, neither of which is highly populated by humans. Both are highly agricultural with a higher deer population in Steuben. Early results show coyotes in Otsego are eating more deer than those in Steuben.

The reasons are as yet unclear but, most of the deer eaten have not been killed by the coyotes. It is only a year into this five-year study and you can rest assured I will be monitoring the results closely as I have great interest. 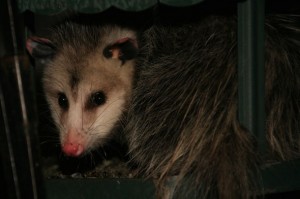 So much for the coyotes; here is a story about a recent encounter with an opossum, I call em possums like the southern folk do. I was driving along the Pepacton on Route 30 and was approaching the Dingle Hill bend, where there are nesting bald eagles, when I observed a possum ambling along the shoulder of the road. I slowed, pulled alongside him and honked, spooking him off the shoulder down to the safety of the woods. As I continued, I observed one of the eagles standing guard alongside the nest. I then began to contemplate a potential moral dilemma. Would it not have been better to let the possum continue on his perilous journey and possibly, most likely, become road kill and become nourishment for the endangered bald eagle? There are plenty of possums which were originally southern critters that have moved north in the past few decades possibly because of global warming. We humans have a tendency to interfere with nature. My good friend Roger Bobley got a great shot of a possum visiting his bird feeder.

The rising temperatures and lengthening daylight hours are a welcome sign that spring is here although maddening cold is still possible. There have been multiple robins bobbing around the fields grabbing I don’t know what as there are no worms out there. Male red-winged blackbirds and grackles are at the feeder along with a single male cardinal, a rarity at this elevation. I can happily announce that Prince Charming is back on the lower pond along with his mate and a pair of hooded mergansers. Who is Prince Charming? He is a male duck with a green head, a reddish brown body and a large white chest. This regal looking guy is probably, according to an Audubon scientist, a cross between a ruddy duck and a mallard, the males of which are known to mate with whoever is available, species not to matter. If the Gazette were a color magazine I would include a photo of this cool guy. [Check out the Gazette website next month to see this photo in color.] As of now I am just delighted that he made it through the winter wherever he was and for his third year of return. I saw eight skeins of Canada Geese the other day honking their way north, a sure sound of spring. Now is the time to revel in and enjoy the outdoors along with all its wonderful creatures. ~