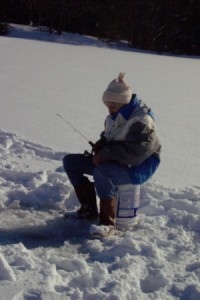 A bundled up Mary Tucker waits, perhaps not patiently, for a nibble

The Andes area is well known for a variety of winter sports. We all know about snowmobiling, cross country skiing, snowshoeing, tubing, and if the weather is just right, ice skating. And then there is ice fishing, more solitary than the other sports. All that is needed is a pond or lake, and basic equipment: an 8″ diameter ice auger, gigging poles, bait, and a New York State fishing license. Most of these items can be found in local sporting goods stores. More sophisticated equipment is available such as different size ice houses for protection from the elements, fishing chairs, and heaters.

New York State has many lakes where ice fishing is permitted. In Eastern New York, we have Otsego Lake, Canadarago Lake, and the Whitney Point Reservoir, all within a few hours driving time. Further away in the Adirondack area are Lake Pleasant and Lake Champlain. Be sure you look up regulations in the New York State Fishing Guide as they vary at each lake. Regulations as to size and number of catch should be followed. 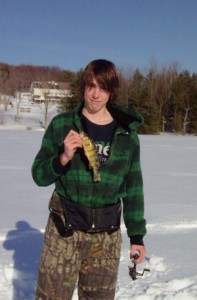 I had the opportunity to go ice fishing on an area pond with friends and neighbors on a sunny afternoon recently. Some of us drove autos or trucks to the edge of the pond; others arrived on snowmobiles, taking them to the middle of the pond where we set up to fish. The men drilled holes in the ice which was approximately 16″ thick. Each person had an upside down bucket for a seat, held a baited gigging pole and waited patiently for a bite. We were fishing for yellow perch since there was no size limit on our pond and up to 50 fish could be taken. Luck was with us that day. Everyone gave their catch to John, who had organized the expedition. The men brought hot and cold drinks and Betty baked a cake to snack on during the afternoon. I’m not a great one for fishing but I did take a turn; not being patient enough, I got discouraged when there were no bites. After a couple of hours a cold wind blew dark clouds in. It was time to pack the gear and head for warm homes.

I’ll end with a joke on me. While researching ice fishing, I came across the phrase “hard water fishing” and wondered how a person would know if the water was hard or soft without testing it. Then like a light bulb flashing on, I realized that it meant fishing on a frozen lake or pond….. ~