WE APPLAUD: JUDY AND HARVEY MORSE 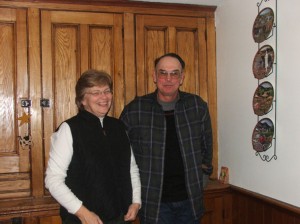 Long before I’d ever met Judy and Harvey Morse, I knew where to find them. Their beautiful farm on the County Route 1 is something of a landmark. “How do I find the historic site of the Anti-Rent battle?” I’d ask someone. “Go down Tremperskill Road and turn at the Morse farm.” Or, “Where is the Transfer Station?” “You want to go past Harvey Morse’s place.” It’s true; you can’t miss it. At the junction of Upper Dingle Hill and Tremperskill Road, it sits with a classic white farmhouse on one side of the road and a large traditional red barn on the other.

Just shy of being a native, Judy Preiser moved to Andes from Hartsdale, New York when she was 10 years old. Her family operated the Andes Garage, a Flying A gasoline station that was located in what is now the CitiHope building on Main Street. After graduating from Andes Central School, she headed to SUNY Cobleskill where she studied Liberal Arts and Industrial Lab Technology. In 1968 she earned her degree and then worked in Albany for two years.

When asked if he has lived in Andes his whole life, Harvey Morse replies with his quiet humor, “Not yet.” His parents, Weldon and Edith Morse, acquired the farm at the bottom of Dingle Hill in 1942; Harvey was born 6 years later, growing up in the same house he and Judy occupy today. Before settling in to the life of a farmer, he went to SUNY Morrisville, graduating in 1968 with a degree in Agriculture Technology, a field sure to help him in his future endeavors. When he returned home after graduation, he immediately began renting the farm from his father who was in poor health.

Judy and Harvey knew each other most of their lives. Being from a small town like Andes, and attending ACS from elementary school through high school graduation, it couldn’t be otherwise. They married in 1970, settling into a house right on the farm. 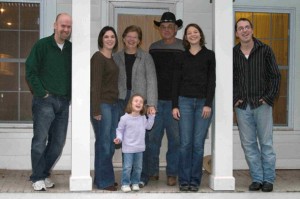 Judy and Harvey with their family

In the decades that followed, both Harvey and Judy led very busy lives, but it is apparent when listening to them that their greatest delight involves their daughters. They are proud that both Stacey and Amy hold Master’s degrees and are working fulltime in their chosen careers. Their first born, Stacey, is a teacher. She and her husband Dan live in Clifton Park with their daughter Collins. Amy is a Human Resources professional at M.I. Bassett Hospital in Cooperstown. Lucky to have them both so close, the Morses get to spend a lot of time with their daughters and their families.

When their girls were young, Judy stayed at home with them, immersing herself in family-oriented activities. She was a member of the School Board, a Girl Scout leader, a Sunday school teacher and involved with the 4H group.

By the time Amy was in the 3rd grade, Judy was ready to rejoin the workforce. Harvey’s mother still lived in the main house, so the girls were not coming home to an empty house. For a while she worked at the Catskill Center for Conservation and Development in Arkville, and spent seven years as the secretary for the Andes Cooperative Creamery. For twenty years she has been at the Cornell Cooperative Extension where she is currently the Office Manager and Agricultural Secretary. Although she says she is not involved with running the farm, it is apparent that her career has complemented the family business.

Of his work as a dairy farmer, Harvey says “It’s a way of life, not a job.” From the age of 19, he has been running the farm, usually with one steady helper. In the summer he may take on extra help if the work calls for it. He’s made changes over the years. His dad kept Jersey cows, but Harvey opted to switch to Holsteins. “They [the Jerseys] have an attitude that just didn’t suit me,” he tells me. Holsteins are a bigger cow and give a little more milk. With an increase in the number of cows on the farm, Harvey built an addition to the barn in 1973, and added a silo in 1976.

In 1993, Harvey decided to give up dairy farming. He sold all his cows, keeping only the heifers and calves. He did anything he could to make money, including driving a school bus, which he’d been doing part-time for 10 years, and doing some trucking. To this day, he still does some excavating and trucking, and comes highly recommended.
Within a year he realized he missed the cows and started over again. The young stock he’d kept were having calves, and he bought some new cows as well.

Today he has 55 milking cows and 40 to 45 others. He keeps most of the heifer calves, but the bulls get sold at auction in Unadilla or Central Bridge. The milk truck comes every other day to pick up the milk; Harvey’s farm produced about 1 million pounds of milk last year.

Although running a dairy farm is a fulltime job, Harvey has always made time for other pursuits. Like his father before him, he served as the Director of the Andes Cooperative Creamery. Sadly, it was during his tenure that it was determined the Cooperative needed to close. Harvey was on the dissolution committee along with Leonard Kovba and Wally Heannings.

For two years he sat on the Soil Conservation Committee of the USDA Farm Service Agency and also served a term on the Andes Town Planning Board. He continues to serve on the Board of Assessment Review, a responsibility he says he has had for too long, but still finds interesting and “kind of fun.”

The Andes Fire Department has been a part of his life for many years. In fact, he joined the department the same year he got married, and points out that he missed his first meeting because of the wedding and honeymoon. In addition to being a member of the Fire Department, Harvey also holds a seat on the Board of Fire Commissioners, a position he has been in for about 13 years total. He resigned a couple of years back but agreed to step in when a seat was vacated last year.

Life is more than work, and more and more both Judy and Harvey are making time for a bit of recreation. Judy enjoys reading, gardening, and traveling with family and friends. Both of the Morses look forward to visits with their 3 year old granddaughter Collins.

Culminating their leisure pursuits was a weeklong trip they took to Mexico last year. Harvey had “real good help” to handle the farm while they were away, and his sister, Linda Thorington from Delhi, stayed at the house with the Morse’s dogs Pepper and Addie. Along with daughter Amy and her husband Charlie and some close friends, they traveled to Bucerias, a beautiful spot on the Pacific Ocean coast near Puerto Vallarta. There they enjoyed whale watching, white beaches and plenty of sun. You couldn’t miss the excitement in Harvey’s voice as he related his experience riding a zip-line, traveling from tree to tree through heavy foliage 60 feet above the jungle floor. Both are eagerly looking forward to a return trip to Bucerias, or perhaps Cancun.

The recently released film from Andes Central School, Dairy Farms of Andes, included a segment on Harvey and the Morse farm. What a poignant memento of a life-long commitment. ~