The editors asked Buffy Calvert to fill out her story:
The little girl in the red dress holding a nosegay of self-heal is Nancy Hunting, my great grandmother. I like to think some itinerant artist painted it to pay for his lodging at the Hunting Tavern. Born in Hamden in 1830, Nancy came to Andes in 1837 with her parents who bought the tavern on the stagecoach route from Kingston to Delhi. 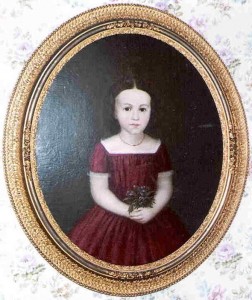 When, in March 1845, her mother Sarah stood on the staircase and brandished a butcher knife in the face of Calico Indians who wanted to drag Under-Sheriff Steele from his hiding place, Nancy would have been fourteen. Up Renters gathered at the tavern. So did Down Renters, if in smaller numbers. She must have heard the arguments raging on both sides. Where did her sympathies lie?
How did she feel when later that year Osman Steele countered her father Ephraim’s warning with a sneering “Lead cannot penetrate Steele!”, dropped a bullet in his brandy and rode off to Moses Earle’s farm? Or when they carried him back dead of a shotgun blast? We can’t know.

We do know that when young Duncan Ballantine rode down from Bovina to set up a General Merchandise Store across the street, she lost her heart. He built her a big white house next door and later built a bank on the other side. Together they raised six of the seven children born to them: four sons: David, James, George Herbert, and Ephraim; and two daughters, Agnes and Lillian. (Another child died in infancy.) David and Ephraim went into the business, David later becoming president of the bank.

James became a dealer in butter, a prime Andes product in those days. Nancy and Duncan carved out a piece of land and built James a house behind theirs (now the Shaver/Melahn house) on High Street. James served eight terms as Town Supervisor, as State Assemblyman, and in 1895 was elected to the State Senate. He died suddenly mid-term of apoplexy (brain hemorrhage). When Agnes married Dr. James A. Gladstone, every detail of the elaborate ceremony, including the many gifts and their givers, appeared in the Andes Recorder. The couple were given James’ house. George Herbert had a son Herbert George whose son George Herbert Ballantine is Andes’ own artist with paintbrush and earthmover. His sculptured landscape is now Ballantine Park.

With the birth of little Lillian, Nancy Hunting Ballantine became deaf. Family lore has it that she never heard her daughter’s voice except through an ear trumpet. Lillian married John Knapp from Treadwell and bore him a son, John Duncan. After her husband’s early death, the young widow was courted and won by a local boy from Delaware Avenue, Matthew Linn Bruce. He whisked her away to New York City where he practiced law, became Lieutenant Governor and State Supreme Court Justice.

Lillian, whose only role in childhood, according to her husband, was to “sit and look pretty”, inherited her mother’s love for company and display. She and Judge Bruce later bought the Ballantine house and renovated it in grand style that prompted her sister Agnes to do the same on High Street. Lillie and Linn had three children, M. Linn II, Lillian Ballantine II and my mother, May Hunting Bruce Stuart.

In her last years, sociable Nancy slept in a downstairs bedroom with a door to the porch. There she entertained her friends to the end of her life. In a letter to her grandson, John, written a few weeks before her death, she invited him and his brother Linn to come see her at Easter. Also his mother, (her daughter Lillian), “and if your father can come with her I will try to help him enjoy the visit.” The Andes Recorder notes that “the flowers at her funeral were in perfusion and very beautiful.” Just as Nancy would have wanted. ~