SELF INTERVIEW WITH A PICKLEBALL PLAYER 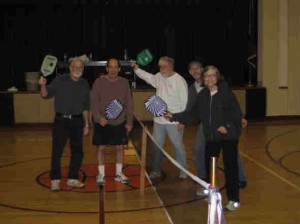 Pickleball players gather for a spirited game at ACS gym

Q: So what’s with all this proselytizing for pickleball players?

A: Well it’s a great game but saddled with an unfortunate name…sort of like that Johnny Cash song “A Boy Named Sue”. It was simply named after the founder’s dog Pickles who insisted on grabbing the balls and chewing them to bits. I’m sure if it were called Cosmic Challenge Ball or Rough and Tumble Ball my mission would be simpler.

Q: Tell us a bit about the game?

A: It’s played on a downsized tennis court or simply over a net on a 44′ x 20′ space so the running is minimized but the action is compact and rigorous. We use special paddles with a plastic wiffleball and usually play doubles. So, like tennis, there are groundstrokes and net play and overheads but in addition there are spins and slices. It works for any age that can still muster some reflexes and aggression and turns out to be quite sociable as the four players, male and female, usually wind up right at the net. Given the smaller court, all comments can be heard.

Q: So how have you done in getting players?

A: Well I have a past history, coming from Long Island, of easily arranging both regular soccer games 3 nights a week and even spontaneous soccer games on a few minutes notice, and the only problems are usually getting a field and dealing with too many players. Here, I find that Catskillians present different organizing obstacles. We have a lovely gym to play in at the Andes school but I do find that the notion of leaving your comfy house and getting somewhere at a sort of fixed time can prove overwhelming. I have stooped to putting up flyers, handing out cards, pulling my car over to anyone I see on a bike, and approaching people I see in the supermarket who seem to be able to reach the lower shelves without much groaning. Right now we have a pool of about 16 players and have been able to play regularly.

Q: What does the future portend?

A: I see vast stretches of Pickleball courts in gyms and on athletic fields with leagues and inter-regional games and beer and dancers and prime time coverage. For the near future, I would just like to invite anyone interested to join us Sunday mornings at the ACS gym (rear entrance) between 11:00 and 12:30. All you need is sneakers and maybe some Advil, for as Dwight Gooden once said when asked if he planned to give up baseball “I am always just looking to play a little more ball”.

Q: Aren’t you the guy who was building that boat in his garage?