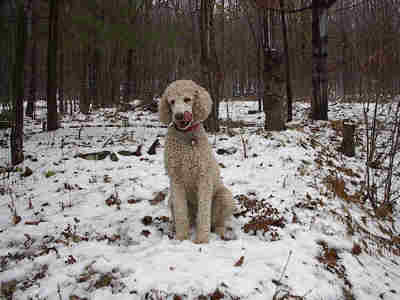 At last life was becoming easier. After spending most weekends and every summer for the last 35 years in Andes, my husband, Dave and I decided it was time to move here permanently. I gave up my job teaching early childhood at The Portledge School in Locust Valley, sold the house I lived in for the past 40 years and traded in my luxury car for what else, the car of Delaware County: a Subaru. The roads on Dingle Hill can be treacherous in the winter. I also gave up breeding Yorkshire Terriers, though still enjoyed our remaining four Yorkies, Maine Coon cat, canary, and three Betta fish.

Then, I got a call from Deb Crute, the director of the Heart of the Catskills Humane Society. She asked if I would be willing to foster a pregnant cat. Since I missed the nurturing and raising of my Yorkie puppies I did not hesitate before saying, “SURE, I’ll be right over!” When I got to the shelter in Delhi I put the cat in the car. I thought since I was here I might just as well take a look at the dogs located in the back. As I opened the door to the kennel the cacophony began. The Beagles and Labs began howling, the Rottweilers, Shepherds and other large mixes were barking in their deep resonant voices. The tiny Terriers, Chihuahuas, and various other mixes were yapping away. All had the same glisten of hope in their eyes which earnestly communicated the wish to be adopted and taken to a loving forever home.

As I approached the last cage I saw her! She wasn’t barking or carrying on; she was lying there with her elegant head on her paws, staring through the cage wire. I asked a staff member if I could walk her, and as she left her kennel she pranced and danced all around me. Life was supposed to be more simple, but I had to have her.

I called home to ask Dave how he felt about getting another dog. His response was, “Do what you want.” This translates to “Don’t complain to me later.” He did remind me that we were going to leave for a road trip to Florida very soon. Would Calee be happy on a long trip with the other dogs? Would she be able to live in a small truck camper barely big enough for the two of us? Friends and neighbors were taking care of the bird, the cat, and the fish, so that was a big relief. The mother cat and her five newborn kittens went to another foster family until we returned from Florida.

After careful packing we managed to leave a small spot in the back seat for Calee. The Yorkies would be in their familiar spot, my lap.

When we got to Bahia Honda State Park in Key West, we discovered that there was a rule, dogs were allowed in the park but had to be leashed at all times. After three days in the car Calee really needed some exercise. I hate to have animals confined and so I was determined to come up with a plan. I came up with a great idea. I decided to go with Calee to the far parking lot at midnight when I hoped the park rangers and DEP were asleep, Calle would then be able to run free. We waited until Dave was asleep as well, and then set off for the beach. It was a beautiful, balmy, moonlit night. Calee wasted no time. She raced on the sand and swam in the ocean and had the time of her life.

I didn’t mention it before but Calee is a champagne-colored Standard Poodle. It is believed that poodles were bred in Germany as water retrievers. The German word Pudle translates into splashing in water. Calee certainly lived up to her breed there on the beach. I had wanted a larger dog, one that would take long walks and swim with me in our pond in Andes. Our Yorkies hate to get their feet wet and need to be carried on long walks. Yorkies love to cuddle, but I soon learned, that Poodles like to as well.

On the first night in our camper Calee figured out how to climb up into bed with us. Our sleeping arrangements were a bit cramped to say the least. The bed in the camper is queen-size and fits into a boxlike enclosure. All the dogs, plus Dave and I had many a crowded night.

We are home now. Calee loves the freedom to race around the fields and down to the pond. She figured out how to jump our Yorkie fence the first time she spotted a squirrel. She loves to chase our cat, Shelby, around the yard. But come bedtime we all cuddle together. This time in a king-size bed.

Calee likes to play with the little dogs but they tremble when she bounds toward them at breakneck speed, at the last minute swerving beside or leaping over them. They don’t have a chance of retrieving a ball, though they give it their best shot. And they’ve all learned to eat what is in front of them or the big dog will come along and finish everything in a blink of an eye.

I am a bit worried about what my vegetable and flower garden will look like next summer as I watch Calee running through the now dormant beds.

Well, I’ve gotta go now. There’s a message on my machine from Deb, “Call me at the shelter as soon as you get this message.”~