We were just sitting down to dinner, in front of the glass doors to the deck. The lamp above the kitchen table lit a small area of the pitch-black evening outside the door. A moving thing caught our eyes. At first glance, I thought, is it a cat? But it didn’t look like either of our neighbor’s cats. His back was facing us as he scratched on the green, grass-like, plastic doormat, as if looking for something to eat. His back was orangey-brown, with tips of black, wiry hair. As he turned, I noticed his tail, not at all cat-like, more like a gigantic mouse’s tail, prehensile and naked. Suddenly, he turned to peer at us through the door. He cocked his head as if to say, what strange creatures those are! He was not frightened. He took his time, studying us, as we studied him. His face, shaped like a huge mouse, was white with dark shadows around his eyes, but not as mask-like as a raccoon. He had a pink nose and tiny ears that stood up from the top of his head. He was about 30″ long. We didn’t want to turn away to get the camera or the book of mammals. We didn’t want to miss observing this strange creature for even a minute. Finally, getting bored with us, and probably not finding anything to eat on the doormat, he moved out of the arc of light and out of sight. 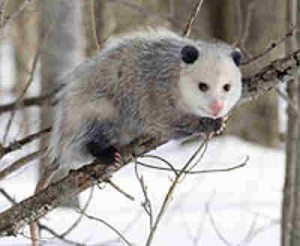 Only then did I turn away to get the National Audubon Society/ Field Guide to Mammals. In it was the exact image of the mystery animal. He was a Virginia Opossum; the only opossum that appears in North America and the only marsupial (having a pouch.) The extensive description told us that this was a nocturnal mammal. We could not tell if the one we saw was male or female. That would have been interesting. The female has a pouch that carries up to 13 babies, who, after a gestation period of only 1 or 2 weeks, are born in an embryonic state, the size of a dime. After birth, they make their way to the mother’s pouch, where each attaches itself to a nipple and stays for two months of continued nourishment and development.

We don’t often have such dinner entertainment, but we did see a cardinal one morning, while having breakfast. Cardinals are rare in our backyard. He was beautiful. The scarlet bird, perched on a low branch frosted with white snow, was a magnificent sight. Again, my camera was not close by. 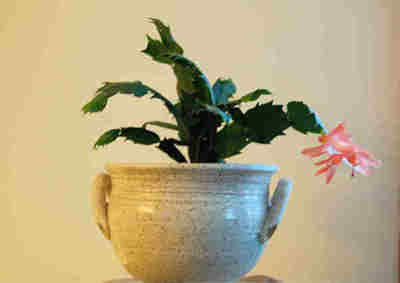 Another exciting thing that happened this month was indoors, when my Christmas cactus, yes, the one mentioned in last month’s Gazette that Eddie P. gave me, gave birth on January 5th, to the most beautiful, double flower. I wish you could see it in color. It’s salmon-pink with a stamen of purple, tipped in yellow. Here it is in black and white, which doesn’t do it justice at all, but perhaps, if you look at the Andes Gazette on-line, you will see it in color. Today, another bud appeared! The Christmas cactus and the oxalis triangularis, with its mahogany foliage and delicate lavender blossoms blooming continuously, add much interest to our indoor garden. ~