A standing-room-only crowd crammed into the school gym on Saturday night, January 24th, to watch a video. Fiddle music played from the stage, lively, but scarcely heard above the hubbub of neighbors greeting each other on the 3º F. evening. Special guests took the front rows marked RESERVED. Students laid out a bountiful array of cakes and cookies baked by the staff while volunteers did a brisk business selling DVDs as yet unseen.

Superintendent John Bernhardt introduced Cheyenne Tait, who was taking a weekend from her freshman year at Princeton University to present the project. Five students had signed up for an elective course in videotography in the fall of 2007. Instructors, Colleen Heavey and Wendy Redden, told them that they had a CWC grant to create a video of the eight dairy farms of the Town of Andes. Ms Tait, Clint Peterson, seniors, and Hope Egnaczac, Ethan Berghammer and Justin Weaver, juniors, set to work.

The resulting historic document and work of art underlines the precipitous decline of dairy farms, once the main means of livelihood in Delaware County and the bustling town of Andes. It celebrates the vibrant lives of our remaining dairy men and women. Mr. Bernhardt asked all of those present that had once lived or worked on a farm to stand. Nearly two-thirds of the crowd rose to loud applause. Then he asked those who were currently living or working on a farm to remain standing. A handful of stalwart souls stood, mostly in the reserved section, the stars of the show. 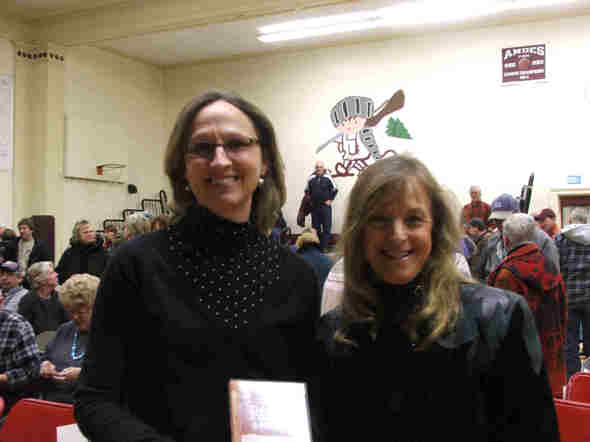 The video presents each farm: its history, its setting in the beauty of our hills, the farmers who work it, the animals and operations. From Bill Laughman and Ruth Fuller, (uncle and niece) and the Darlings who milk only Jerseys, to Dick and Roger Liddle (father and son) who have Ayrshires and Holsteins, to others who swear by Holsteins as most even-tempered, each set of homesteaders showed the independence they prize as one of the major benefits of the profession. Some had gone onto the family farm right out of school, gradually taking over the operation. Others, like Walter Gladstone and Harvey Morse, had gone off to college and returned to the family farm as the most satisfying way of life they could imagine. The size of the operations range from Roger Terry’s 21 milkers to the 180 who pass through the barn of Jim and Russ Darling and Russ’s daughter, Amber, twice a day. Their operation is technologically sophisticated, but every one of their cows has a name.

Husband and wife, Martin and Peggy Liddle, herd their cows across the road to pasture after feeding and milking from 4 – 7 or 8 morning and evening. She values having been able to stay home with her children. Ruth Fuller manages to work around her children’s schedules by milking at 11 pm. Judy Tait, who farms with her father Viggo Skovsende, has four growing daughters to help out but still needs to get up a 3 am. Every one spoke of the heavy work of haying and putting in crops in the growing season. Some grow acres of sweet corn, squash or pumpkins for a farm stand. Most need to work acres of the nearby land of former farms to make ends meet.

The young people have created a treasure. They have brought to life the fine, articulate men and women who breed and care for their herds, produce milk that meets today’s high standards, and savor the self reliance that the hard-working life of a farmer demands. ~