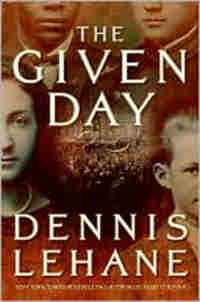 The Given Day, by Dennis Lehane
Reviewed by Rima Walker

Set in Boston after World War I, Lehane’s latest and best novel reveals a time of great social unrest, told through people trying to deal with the aftermath of war: agitators involved with raising the consciousness of Americans who exploit labor, politicians whose corruption leads them to greater abuses and racism.

The two main figures, Danny Coughlin, a policeman, and Luther Laurence, an Afro-American from Tulsa who flees to Boston after killing a drug lord, meet and become friends. Danny’s father, Thomas, an influential and beloved police captain, represents the status quo of family values, religion, and politics and guides Danny by having him work undercover with the Bolsheviks, unionists, and anarchists who want to change the world from what Thomas treasures to a state of chaos as he sees it.

Danny begins to realize the huge inequities that people like Jack Reed and Emma Goldman want to cure, mainly through unionization, and that the Boston police department severely underpays the police, makes them serve in filthy conditions, and does not pay overtime despite promises during the war that these inequities would be fixed when the war is over.

Based on true events such as the Spanish influenza epidemic, the Boston Molasses flood, riots between the National Guard and the police, culminating in the Boston police strike in 1919, the book follows Danny’s and Luther’s fates as they become involved in and struggle through the events of their time.

Threaded through is a love story involving Danny and Nora, a young woman with a secret in her past whom Thomas had found starving in the streets. She works for the family, is pursued by Connor, Danny’s brother, but is in love with and eventually marries Danny very much against his family’s wishes. We also have a glimpse of Babe Ruth’s life and career in episodes that occur throughout the book. In a sort of E.L. Doctorow Ragtime kind of way, the opening chapter deals with Ruth and his encounter with Luther in a pick up baseball game and ends with Ruth going to New York after being traded to the Yankees.

What’s best about the novel is the incredible strength of the prose. Lehane outdoes himself particularly in his descriptions of the friendship between Danny and Luther, the virulent racism of a corrupt police lieutenant, Eddie McKenna, and in the most powerful description of the police riot, so strong the reader is swept up in and becomes a part of it.

This is a book not to be missed for its profound glimpses of our past, the telling of seminal changes that went a long way in altering the attitudes, mores, and way of life that took place in America in the early 1900’s and impacted our own. ~