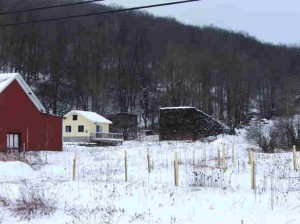 Tree shelters seen along Route 28 on the way to Delhi

Every time I drive to Delhi, I wonder about the field full of “sticks” next to a beautiful yellow farmhouse on Route 28. Some months back, I noticed a group of people putting tall wooden stakes in rows in the field; around the same time a similar row emerged on the hill in front of Delaware Academy. Was it a flurry of fences being installed? But no fences appeared. Instead, plastic tubes were attached to the stakes.

Asking around, a few theories evolved, the most reasonable seeming to involve trees. We’ve all seen things placed around trees to protect them from certain types of insects or lawnmowers, but these stood there proudly with no visible tree poking out of the top.

To the Internet I went. My first stop was to the website of the Catskill Forest Association. In an article on planting trees in the Catskills was the explanation: “Tree shelters protect seedlings and saplings from browsing, direct sunlight and wind. They also create an improved micro climate for the plant, trapping heat and moisture.” This gave me the necessary terms to look further, and I learned quite a bit. According to one source, using tree shelters on seedlings can increase their survival rate 50% compared to those without benefit of such a shelter. These translucent plastic tubes offer a number of advantages. The micro climate advantages include increased humidity, higher CO2 levels, reduced drying and mechanical damage caused by wind and a reduction of harmful UV light. The physical barrier itself protects the plant not only from feeding herbivores but also from chemical sprays, lawn equipment and the like. 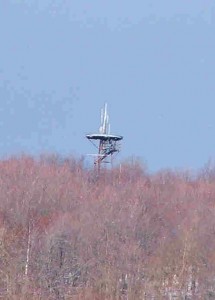 Anyone know what this is?

Depending on the tree growing within the tube, it could be months or years before the growth extends beyond the height of the plastic. Meanwhile, the shelter is nurturing the sapling during the important early stages of its growth.

One mystery solved, but another presents itself to me. I was at the intersection of Cabin Hill Road and Fall Clove Road when I noticed an odd looking structure way off in the distance. Luckily, I had my camera with me and snapped the photograph below. I have no idea what it is, so would love to hear from our readers. Whether you know for sure, or only have a theory, send your answers to the Gazette at P.O. Box 223, Andes, NY 13731, or andesgazette@catskill.net.