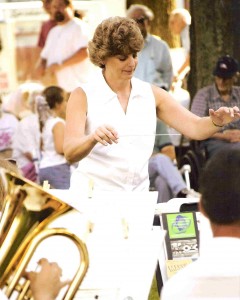 Diane Granger Krick lifts her graceful hands. The musicians raise their eyes. Her face lights in a “You can do it!” smile. And whether she is leading the Delaware County Band, the Andes Presbyterian Church choir, the Community Cantata singers or Delhi kindergarteners, the sound from her amateurs is sweet and melodious, far better than their best. A sort of magic born of hard work and inspiration.

Diane came to Andes to teach instrumental music in midsummer of 1984. Within a week she was leading the school marching band at the Walton Fair. She hasn’t stopped since. Fresh from earning her Masters at Ithaca College, she introduced the fourth grade students to instruments, directed the elementary, middle school, and high school bands and started a jazz band. She had extraordinary rapport with her students. One year, counting on her good humor, a bunch of boys in the Jazz Band turned up for a performance in dresses. “But you said, ‘”Dress nicely! Wear skirts.'” “I meant the girls!” she laughed, as they trooped off stage to peel off their ruffles.

Year after year her students won “Excellents” and “Outstandings” from the NYSMA judges and were awarded chairs in the All State Band. After 14 years at ACS, Diane accepted a post at Delaware Academy as director of instrumental music in the middle school. There, also, her students have excelled. This year Delhi had five first chairs in the All State Band, the most of any school, state-wide.

Every year she takes her students to a competition in Lake George where they bring home trophies for their performances and enjoy an afternoon at the Great Escape amusement park. In the summer, Diane assembles and directs the Delaware County Community Band which plays on Friday nights at the Delhi Fair on the Square and at the Meridale Dairy Fest.

After coming to Andes, Diane joined the Presbyterian Church where she serves as an elder and directs the choir and the Community Christmas Cantata. Her style draws beautiful four-part harmony from her singers, young and old, trained and untrained, a pleasure for singers and hearers alike. She carefully chooses music to challenge but not exceed the ability of her musicians. She is patient; persistent, and unflagging, and always self-deprecating (“Let’s try that again. I messed up!”). She cheerfully goes over areas others need help on, yet keeps alive an amazing belief in the ultimate performance.

She comes by her musicianship honestly. Her father, Richard Granger, taught music at Waverly-Van Etten High School where her mother, Kathleen, was school secretary. Diane played flute and piano and graduated first in her class. She and her younger sister Kathy loved going to their grandparents’ cottage on Lake Cayuga for swimming and biking with their wider family. Kathy lives in Downsville, so their families still get together often.
In 1988, Diane married Gordon Krick who taught physical education and coached at ACS. He proposed on a flat rock on some land he owned high above Gladstone Hollow, land on which they have recently built a beautiful home. Their daughter Kathryn was born on January 1, 1991. She, like her parents, is a fine musician, a singer who starred in South Pacific and other Delaware Academy musicals and a flautist, performing in bands (including first chair in All State) and as soloist and in duets with her mother for many occasions.

Diane and Gordie also have two children from Gordie’s first marriage. Holly, a doctor in Clifton Park, whose husband teaches high school English, has a 2-year-old daughter Sophia and one on the way. Neil works for Hanah Mountain Resort and Country Club.

Diane is the personification of grace. Just before school opened in September, she received a call telling her that, due to a shuffle in positions, she would not be directing middle schoolers for whom she had carefully prepared as usual, but kindergarten-fifth grades, and not in instrumental, but choral music! After a small protest, she readied herself and gallantly met her classes. Now, the little ones chirp, “Hello, Mrs. Krick!” when they see her in the hall and eagerly arrive for lessons. And she rejoices in the strides they make, recognizing notes and rhythms and singing their little hearts out.

It was a happy day for Andes when Diane came to town. She brightens our world with her smile, her warmth, and her music.~