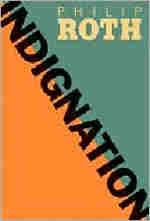 It’s short and looks like a quick read, but don’t let it fool you. Seemingly Indignation is a 1950’s coming-of-age story about Marcus Messner who goes off to Winesburg College in Ohio mainly to escape his family in Newark and to avoid the Korean War draft. Roth being Roth, this is just not that simple.

Two of Marcus’ cousins have been killed in Korea, adding to what becomes complete paranoia on his father’s part. He is a kosher butcher who fears that Marcus is entering an adulthood fraught with dangers he might not survive: a knifing, a hit and run, a slaughter in Korea, and anything else real or imagined. Marcus, still inexperienced, though he has grown up in a big eastern city, leaves for a completely different life: a rural, conservative small college that subjects it students to all the restrictive rules and regulations of the 1950s.

Wanting only to study and become class valedictorian, Marcus leaves his first dorm because his roommates make too much noise. He goes to another room with yet another roommate that he can’t abide and ends up in the least desirable room on campus. This arouses the curiosity of the dean who calls him in to discuss the problem. Marcus sees none. The dean is suspicious and watches Marcus, meeting with him again to discuss his lack of religious belief when he pays someone else to take his place at compulsory chapel meetings. Small things ostensibly, the dislike of roommates, the personal choice to believe or not believe, and a desire to be alone to do well in college. But none of these are small and begin the ball rolling towards a shocking ending.

The main situations pulling Marcus away from his goals are his love for Olivia and his clashes with the dean. Marcus enters into his first sexual experience with Olivia who has scars on her wrist from an attempted suicide. Marcus is leery of her but can’t leave her alone. He loves her, introduces her to his mother, and understands why she makes him promise to have nothing to do with Olivia. Marcus questions his attraction to Olivia, a “girl so pretty and so intelligent and so sophisticated” who didn’t want to live past her nineteenth year; but he tries to find ways to circumvent his promise to his mother.

The dean’s criticisms arouse in Marcus a rage, a sense of extreme indignation. He feels he can control his life, make his own decisions, and needs no guidance to lead a moral and just life. He passionately quotes his hero, Bertrand Russell, a Nobel Prize winner whose philosophy Marcus deeply believes in. This is one of the most moving and intriguing parts of the book.

Some readers will foresee the novel’s ending; others won’t; but find out what happens to Marcus in the ironic twist of the denouement.~