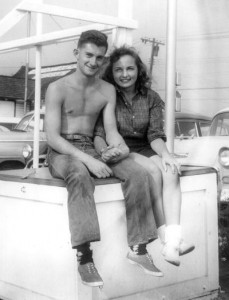 Tyler and Lesley Gray as teenagers

We know them as master artisans-he with wood, she with a needle-who live at the top of Dibble Road in a house they built themselves. We see her in the village teaching quilting and appliqué, serving on the board of the Society for History and Culture, putting in countless hours for the Fire Auxiliary. We see him at all hours of the day or night in slicker and boots rushing to the rescue with other volunteer firemen whenever disaster strikes: fire, accident, or trees down; in suit and tie, as a Town Justice behind the bench at Court; or in jeans and hard hat, as pro bono Clerk of the Works for the library renovation. To be so involved in community life, the Grays must be long-time Andes residents, no? No.Lesley and Tyler moved here full-time only seven years ago. But their love affair with Andes began in the mid-sixties when Tyler was Construction Project Manager for a section of Route 17 and they lived in Roscoe. On an excursion off the beaten path they spied a bedsheet with LAND for SALE on George Hoag’s front yard on the Tremperskill. An irresistible view from a steep slice of the mountain. And there they camped with their children: Allison, Scott and William, roughing it as they built their house over the years on all-too-brief vacations. 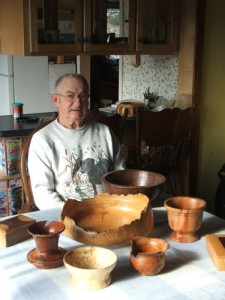 Tyler and an array of his creations

Tyler was born to Tyler and Marion Gray in Plattsburgh, moving as his father received promotions in the State Prison System to Hurley, Woodburn, and, finally, Freeport, Long Island. (Asked how he came by “Tyler” he said his grandfather, working on a railroad in the Adirondacks, had his throat torn out in an accident. A local Doctor Tyler punctured the trachea with a pen and saved his life. In gratitude he named his firstborn son for his savior. And that son followed suit.)

His love of the sea, stimulated by his work on a charter fishing boat during high school, drove Tyler to enter the Merchant Marine Academy. He graduated but never went to sea. By his own smiling admission, “I was too involved with a girl.” In his senior year of high school, Tyler met a pretty, pert young lady named Lesley at a party. She had come with some of her skating buddies from nearby Merrick. They married in 1960 after Lesley earned her A.A. at Farmingdale State Agricultural and Technological College.

Lesley’s father worked for the NYC Transit Authority; her mother for Gulf Oil. With her sister, Lorraine, and friends she played all the games girls enjoy, but she had a special love of sewing. From the age of twelve she made her own clothes, including, according to Tyler, “a very beautiful wedding dress” of peau de soie and lace. This passion for needlework of all kinds has taken her all over the country, to exhibitions, workshops and retreats, where she shows her work, teaches and takes classes with an insatiable thirst to learn new techniques and explore the history of needlework through the centuries. She beams, “I like to get others turned on to the delights of my craft.” 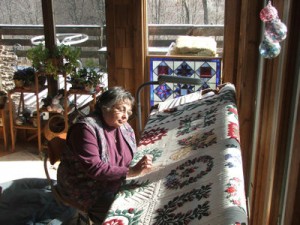 Lesley working on one of her quilting projects

In her last five years in Bloomington, Illinois, she canvassed the state with a blue ribbon panel from the Land of Lincoln Quilters Association, documenting and photographing 15,000 quilts, old and new, to create a book of Illinois quilting history. In the 1980s, as state-wide coordinator for the ABC AIDS babies quilt project, she collected 3,000 baby quilts at her house, hauling bagsful in from a drop-off spot on her porch. As she told a reporter from the Chicago Tribune, “Our living room is the receiving center; the dining room serves as quality control. We use the family room for shipping. And Tyler pays the postage!” A mere six years after her move to Andes, as a tribute to her extraordinary skill and investment in the craft, Lesley Gray was inducted into the Catskill Mountain Quilters Hall of Fame.

To recapitulate their life saga: in the mid-sixties, when the Route 17 job finished, the Grays started a construction crane rental business on Long Island. After selling the cranes in 1970, Tyler became start-up supervisor for the Shoreham Nuclear Power Station. In 1984, the station was up and running. He transferred to Bloomington, Illinois where he reviewed nuclear systems and maintenance in five states. In 1994, Tyler became the energy efficiency engineer for State Farm’s 10,000,000 square feet of buildings.

The children have inherited their parents’ artistic and technical bents and sense of community. Allison is an architect in Texas, Scott designs tools and dies in Connecticut, and Bill works for State Farm in Bloomington as a communications expert.

Until he sliced his fingers with a power saw, Tyler, after seven months of intensive training, served as an Emergency Medical Technician on the Andes Emergency Squad. He still turns beautifully sculpted wooden bowls of unusual native woods which he displays and sells at shows and generously donates to local charities. You may also see him on Saturday mornings as a library volunteer or doing a project with the “Grumpy Old Men.” Lesley acted as curator for the ASHC quilt show and revamped the Tavern gift shop, ferreting out local crafts for display on Tyler’s artfully designed shelves. She donated a spectacular quilt for a library raffle: the only prize needed to net a handsome sum. You can see her magic needle in action and learn her secrets at Stitch Witches on alternate Tuesdays.