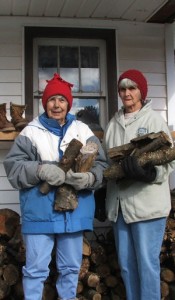 Nature played “Trick or Treat” on the unsuspecting residents of Andes, dumping 6 inches to 2 feet of heavy, wet snow in the village and surrounding hills. A “treat” for students who got “snow days”; a “trick” for adults with slick roads, fallen trees, broken branches, and power and telephone outages. The storm affected most of Delaware County, which was not ready for this type of storm in October.

Tuesday, October 28: On arising at 7:00 am, I flicked on the switch and found the electricity was off. Outside, a coating of heavy, wet snow covered the ground, trees and power lines. No problem; we’ve had power outages before. The power will be back on shortly. At 9:00 am power was restored, but the snow was falling MUCH harder. Andes Central School announced a 2-hour delay. By 10:00 am, roads were plowed but very slick; travel advisories were in effect and schools were closed for the day. Power went off again around noon, on at 2:00 pm but only for a few minutes; still not worried as DCEC (Delaware County Electric Co-op) is good at restoring power as quickly as possible. As dusk approached, I started preparing for a longer outage by getting blankets and candles out, melting snow (on the gas range which, fortunately, could be lit with a match) for drinking and flushing. By now the house was getting cold and so was I, despite having on layers of warm clothing. Earlier that afternoon I went out to clear the 10″ to 12″ of snow off of the car and saw Sue Tucker’s car passing by. Thinking she and her family had left to stay with friends, I called a neighbor, Betty Little, who has a wood stove, to ask if I could stay with her for the night. After leaving a phone message to let my family know my whereabouts, I walked to Betty’s home. Her power had been restored earlier and stayed on. Power lines in her area of Fall Clove Road are run from the Downsville Substation. The remaining Fall Clove power lines are run from the Delhi Substation. Betty was up several times during the night to tend the stove. Snow continued during the night, alternating between light or heavy snow. 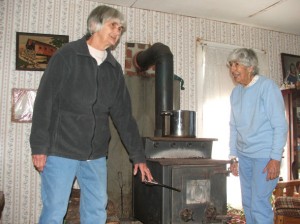 The stove that helped Betty and Mary survive the storm

Wednesday, October 29:   After having breakfast with Betty, I walked home expecting the power to be on. No such luck and now problems with the phone which worked on and off for a couple of hours at a time. After lunch, I melted more snow to use for making tea and bathroom use and boiled some for drinking. Sue and Mike were going to Delhi to replenish the kerosene supply for the heater they had purchased on Tuesday. I went along to attend to some important business and to get a few groceries. At DCEC we were told our power could be out until Saturday because of extensive damage to power lines throughout the county. Sue asked me to stay with them on Wednesday night, so I headed up around 6:00 pm. They had the heater going, many candles lighting the room making a pleasant atmosphere. At 7:00 pm, the light went on and I returned home. Since it would take some time to get hot water, showering was put off until morning.

Thursday, October 30: Everything seemed back to normal. After breakfast, I put away the candles and blankets, watered plants with snow water, but left boiled snow water on the stove. At 8:15 am, under a hot shower, body soaped up and ready to shampoo my hair, suddenly there was NO WATER COMING FROM THE SHOWER HEAD. The power was off again! What to do now? Remembering the water on the stove that I couldn’t bring myself to dump down the drain, I wrapped up in a towel, heated the water a bit, poured it into the bathroom sink and rinsed off with a washcloth. After calling DCEC and being assured that power should be restored by afternoon, I decided there was no point staying here and went down to Woody’s for coffee hour to catch up on local doings and then to my grandson’s sectional soccer game in Bainbridge. They had no snow there. On the way home that afternoon, I checked each home for lights on Route 2 and Fall Clove saying “they have power”, “they have power”, until I arrived home at 7:00 pm. The power was indeed on and the phone was working. Hurrah!!

*** Thanks to road crews, linemen, chainsaw volunteers, and others who worked diligently for many hours to restore the conveniences we take for granted until we are without them.