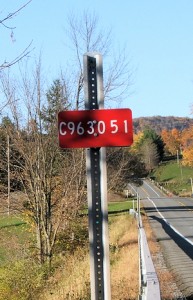 This is one of many such signs cropping up along state roads.

Have any of you noticed the little red signs popping up along the side of Route 28? Over the last few months I have spotted them in a number of places, and tried to figure out what they were. Each has a series of white numbers, prefixed by the letter “C”.

At first I thought they were crop markers, like others I see around next to fields of waving corn, but at the site of many of these new signs there weren’t any crops. Then I noticed that some were near streams. Waterway markers, perhaps? But that didn’t hold; at quite a few there was nary a drop of water in sight. I mulled over a variety of ideas before I hit on the one that seemed most likely. Could the ‘C” stand for culvert?

Hopping on the Internet, I searched the NYS Department of Transportation site for information on a culvert project, only to find that there were more culvert projects than I could imagine. A further search on “little red signs with white letters” was fruitless. A dead-end?

Luck was with me, though. Driving past the Town Hall one day I noticed a DOT truck parked across the road. I immediately accosted the men beside it, certain that my inquiry was of more importance than whatever task they were headed for. They graciously confirmed that the signs were indeed erected to identify the numerous culverts along state roads.

Good information to have if I ever come across a clogged culvert, don’t you think? ~