The interior demolition phase of the library restoration was completed. The contractors uncovered unexpected roof damage and repairs were made. When the second floor was reinforced and the walls were stripped, there was evidence of at least two previous fires, one of which burned the roof off. The remaining rafters were charred but the roof decking had been replaced at some unknown time in the past. The staircase has been relocated and the electrician has roughed-in the lighting. The mechanical contractor’s work is well on its way toward completion and the next major step in the renovation will be the insulation.

In our interim space at 295 Main we have a new computer, paid for in part by the Bill & Melinda Gates Foundation. ~ 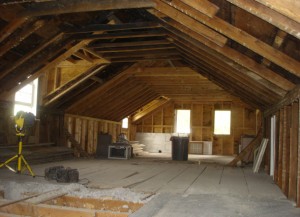