DRIVING OUT OF MY RUT

Now and again we all get stuck in a rut; I’m certainly no exception. With gas prices as high as they are, I have pretty much limited my driving to trips of necessity. Most days this includes only jaunts down Route 28 into the hamlet of Andes for daily errands, visits and work, or up Route 28 to Delhi for groceries or to see my son. This stretch of 28 was dangerously close to becoming my view of the world, so on a recent afternoon I decided to break out of my rut and wander a little further afield, gas prices be damned. With Bob behind the wheel, the dogs in the back seat and my camera at hand, we were ready to take in the abundance of beauty Mother Nature blesses us with this time of year. 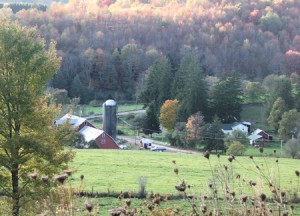 Wherever you go in Andes, you're sure to find a magnificent view

Andes was our destination. Not just Main Street this time, but roads we don’t usually travel in our day-to-day world. What a glorious day it was, only partially due to the changing colors of the leaves. In fact, in many spots the hues seemed less brilliant than in years past and many trees had already shed their foliage. It was the landscape in general that wowed me.

First we headed down the other side of Doig Hollow and meandered along Gladstone Hollow. A friend had just told me the views there were fantastic, and she was so very right. Rolling fields still touched with green were bisected by stands of trees in varying phases of their transformation to bareness. Dotted with farm buildings, the scene was topped by blue-hued mountains beneath a dramatic sky full of lush clouds. 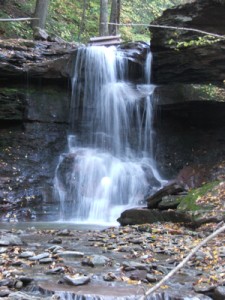 The next leg of our journey took us down the Tremperskill and over Dingle Hill. We made lefts and rights wherever we came upon them and ate up the images we witnessed along the way. Narrow roads wound through dark woods, leaving us breathless as we peered down the steep banks. These are not roads to maneuver carelessly. Suddenly the darkness would turn to light as the trees gave way to open fields, edged by fall’s remaining wildflowers, many already in their dried glory. Waterfalls splashed over rock ledges into streambeds of stones. The waters were rather languorous that day, but there was plenty of evidence that, not long ago, they raged out of control. 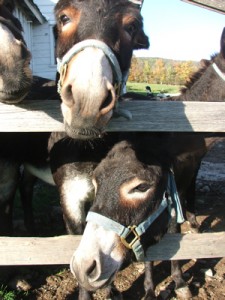 Despite the grandeur around me, it was the stops we made at the Morse farm and Don and Vera Liddle’s place that gave me the most pleasure. At the Morses’, we checked out the cows as they lazily munched on the grasses still green in the field. Magnificent black and white beasts, they evoked such a sense of serenity. Don Liddle was delighted to introduce us to his family of donkeys, who nosed each other out of the way trying to monopolize his attention. There was no mistaking the pride he has for this brood. With glowing face he pointed each out by name, most selected by the location of their birth, such as Meadow and Barn-ey. Fatima was there, too, the lucky mare Don and Vera adopted a year ago. Vera tells me that Fatima charms her with kisses after receiving treats. And behind them all, a row of contented cows quietly watched us fawn over the other animals, thrilled, no doubt, that it wasn’t them being annoyed. 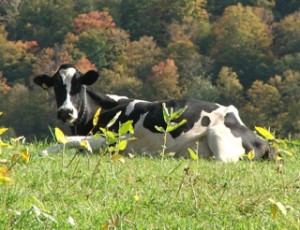 A cow at the Morse farm enjoys the autumn weather

Lesson learned. While I will still be careful about the gas I use, no longer will it keep me prisoner. There’s too much going on around us to ignore. ~