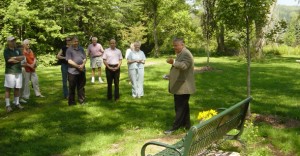 On Sunday, August 24th, a group of family and friends led by Town Supervisor Marty Donnelly dedicated the new park bench in Ballantine Park. The bench was installed last month at a beautiful site in the park near the stream. A simple bronze plaque on the bench reads: “In memory of George Calvert”. George died in July of 2005.

For those of you who didn’t know him, George was the consummate community activist. After a long career as pastor in East Harlem, he and his wife Buffy moved to Andes. George served as a Chairman of the Village Planning Board, president of the Andes Chamber of Commerce, was active in the Andes Presbyterian Church, sang in the church choir, and was instrumental in dealing with the New York State DOT in matters regarding the Andes Streetscape. His official positions and activities are too numerous to list here, but among his major accomplishments were securing a state grant to finance sewer hookups in Andes Village and seeing the project through to completion, advocating for the town to purchase the land which became Ballantine Park and rescuing and refurbishing the original mansion of Duncan Ballantine. 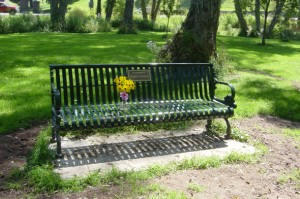 George was a man of incredible energy. Those of us who had the privilege to work with him were often left gasping in his wake. Like a force of nature, he would encourage, cajole, prod and push, to motivate everyone to work for the best interests of Andes. He was always positive and saw the potential for all the enterprises in the Andes area.

George was a man of vision. Many of the seeds he planted are just beginning to flourish now. He was never more visionary than when he was with children. He understood their value to the community and was a staunch supporter of Andes Central School. He acted in their plays, brought students to Albany to see the democratic process first hand, advised their clubs and constantly encouraged them in every way.

My recollection of George is the image of him leading the singing of Christmas carols at our Christmas tree lighting ceremony. His face would light up and shine as Santa arrived on the fire truck. Some of us try to fill the vacuum left by George. His influence was inspirational to say the least. After each tree lighting now, I look up and ask: “How’d we do George?” ~