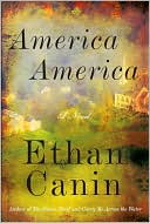 America America is crammed with many of the themes that so many novelists through the years have dealt with: rags to riches, the mixing of the social classes, the coming of age into maturity, the experience of boarding school for a young man of a “lower” class. The most important theme is the political system in the United States and the behind-the-scenes people who fuel the campaigns for politicians who claim to be, and may sincerely desire to be, idealistic in their use of power to serve the people of this country. But at the same time, these politicians can be personally and/or politically corrupt. Some of this sounds familiar? The Great Gatsby for example? The downfall of Richard Nixon, perhaps? And, yes, the novel does take place during the years of Nixon’s campaigns and the disaster of Watergate.

Our narrator is Corey Sifter, who in his maturity looks back on his early years as a worker on the estate of Liam Metarey. Liam’s family goes back to the founder of a small upstate New York town where the clan’s descendants become wealthier and wealthier until ultimately Liam emerges as the moving force and financial power behind Senator Henry Bonwiller in his bid for the presidency among the likes of George McGovern and Ed Muskie against Richard Nixon.

As an adult, Corey sifts through those teen years when he worked for Liam, fell in love with one of Liam’s daughters (whom he eventually married), and was sent to boarding school by Liam who saw something special in Corey. He witnessed Liam’s support of Senator Bonwiller and the great cover-up as Bonwiller’s ascendancy crashes to the ground.

What is Bonwiller guilty of? Financial skullduggery, yes, but also the death of JoEllen Charney, with whom he has been having an affair. How that name resonates with those who remember the great Kennedy clan and the unfortunate death of Mary Jo Kopechne, and also with those who read Joyce Carol Oates’ take-off on that tragic death in her book, Black Water. Ted Kennedy was able to rise above the Chappaquiddick scandal. But not so Henry Bonwiller, whose fall is complete and wide-ranging, bringing tragedy to the Metarey family and to Corey whose loyalty to the family and whose feelings for Liam were true.

There are flaws and some unanswered questions. Were there still families in the 70’s who took underprivileged teenagers to their hearts and provided for them? Does loyalty remain undivided in the face of obvious lies and cover-ups? Why does Liam give up his life so easily (or perhaps not so easily) in the face of Bonwiller’s lost chance? Is it disillusionment alone? Why does Corey remain loyal to Liam? How does he decide whom to marry?

In spite of all this, the novel is a grabber. We do want to find out what happens to Corey in his journey from houseboy to entrepreneur. We are interested in his relationships with his family, his friends, his schoolmates, with Liam, and with his wife and children. And we are most of all interested in what Corey makes of what has happened to his life in light of all that occurred in his teens. He tells us at the end that he has learned that “love for our children is what sustains us, that people are not what they seem . . . .that we never learn the truth.” But it is we who have to decide if Corey is telling us the truth. ~