WHERE THE BUFFALO ROAM

Sunday, June 30th
There was a quiet hiss as the dart escaped from the rifle and struck the shoulder of the rust-colored bison calf. She didn’t even notice it and it was the last dart we had with us. Donnie Bush and I exchanged silent glances, wondering if the dosage was enough. This was the climax from a lot of effort by a number of people. We would know in a couple of minutes if their efforts would be successful…

Sunday, June 8th
My phone rang. It had been a quiet Sunday afternoon. It was Donnie Bush from over on Hubble Hill. I have known Donnie and Suze Skovsende for sometime now, having assisted in recapturing a pair of wild mustangs which escaped from Donnie’s place. 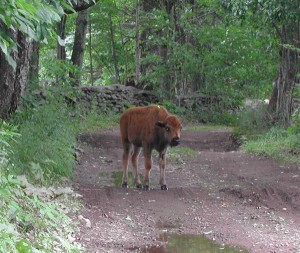 He wanted to know if I was aware of the bison cow with a young calf that had made their way over to Hubble Hill in Middletown. Donnie explained the mother had been killed but he and Suze had almost captured the calf on Friday, but during confusion with other area residents over the attempt, the calf escaped. Last they heard, it was being chased by kids riding ATVs. Word was that the men who had been hired to kill the mother bison had also been trying to dispatch the calf. Frustrated with the entire situation, Donnie and Suze decided to call me.

I do horse rescue, not bison rescue, I protested feebly as my resolve crumbled at the thought of a 2-month old calf left on her own. It took an interminable five seconds until I agreed to help organize a team to rescue the calf. I knew two things needed to be done right away: Alert the police that a team was assembling to rescue the calf and engage the press to get out the word that people risked animal cruelty charges if they chased or killed the calf. Hopefully this would buy her some time.

I met with Donnie and Suze the next day to formulate a plan. Our research determined that roping a bison was dangerous to both animal and human. Bison are wild animals and, unlike cattle, they have a much softer throat and a lasso can crush their windpipe when snapped tight by a fleeing animal. Also, they tend to turn and charge at a threat and even a small calf is strong enough to hurt a person. This meant bringing in a pair of cutting horses and roping her was out of the question. It suggested that our first plan might be to build a pen around the bison and then chute her right into a waiting stock trailer. After some enthusiastic discussion, Donnie suggested that we have an old nurse cow on hand as the calf was barely two months old, too soon to be fully weaned and appeared to be looking for companionship. We decided our back-up plan would be to dart her. Now we just have to find her.

In the meantime, Colleen Segarra from Equine Rescue Resources contacted Don Tweedie of Walton who, with his wife Lynn, runs a bison farm. They said they would be happy to take in the calf. With our team growing, Donnie, Suze and I went up Margaretville Mountain Road to check on a sighting. There, along the side of the road, mixed in with the deer prints we found bison tracks. Unfortunately, that was the last we heard of her for over a week.

Monday, June 23rd
It was evening when the Blue Deer Center on County Route 6 called me and said that the calf was on the property and surrounded by several police officers who had not yet succeeded in capturing her. I wasn’t surprised as we had received an earlier report that she was grazing across from Rob Orvetz’s dairy just up the road. It was good news that she was staying in the same area, but I was concerned that any attempt to corral her would hurt her or drive her away.

I left a message for Donnie, then jumped in my truck and headed over. I drove slowly as I passed the center and suddenly the calf darted out onto the road in front of me. For all my efforts, it was the first time I had actually seen her. I looked at her and she looked at me. Then in a flash, she bounded into the brush and up the power trail toward Margaretville.

I pulled off the road and I headed up behind her. Slightly out of breath, I caught up with her ten minutes later. She was grazing about half-way up. Just over two feet tall and covered with rust-colored baby fur, she looked healthy with a shiny wet nose and bright clear eyes. Getting down on my hands and knees, I crawled up to her. At about five feet from her, I crossed into her safety zone and she took a few steps away. I slowly backed up and lay in the grass with her, waiting for Donnie and other team members to arrive, hoping they got my message. They never did.

The calf and I stayed together for another ninety minutes before she decided she had had enough and took off into the woods. By then, I knew there was no hope of building a pen around her. The only way to bring her in safely was to dart her. And to do that we needed to have her come to us when we were ready to capture her.

Sunday, June 30th
Under the threat of rain, members of the rescue team started arriving at 10 am at Orvetz’s dairy, our base camp. Suze brought her large horse trailer to use for transport. Frank Spinelli loaned us his dart rifle, and we carefully measured out tranquilizer into bright green darts while those of us old enough told jokes about Mutual of Omaha’s Wild Kingdom to ease the tension. Our plan was simple – spot her, dart her, load her in the stock trailer and take her to Walton for quarantine. Dave Knapp had seen her almost every day early in the mornings and other reports indicated she came off the ridge mid-day for clean water from the Plattekill, crossing the road at the Blue Deer. Charlie Bush provided us with a heavy duty ATV and a flat game trailer in case we needed to take her off the ridge. Using radios to keep in touch, part of the team fanned out along County Route 6 and up the power trail. Donnie, entrusted with the dart gun, set himself up along the road with a clear line of vision. 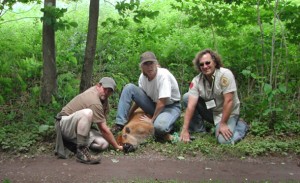 Donnie Bush, Denise Norris and Dan McCarthy (left to right) finally subdue the bison calf in preparation for transporting her to her new home

Frustrated after several hours of nothing, I decided to take a walk down to the Blue Deer with Dan McCarthy and Patricia Kitchen. After crossing past the observation area, we walked up-slope and then back through the woods toward the power-line, hoping to spot her. Unsuccessful, Dan and I were hiking back down at the power-line when we heard the honk of a horn and a faint yell that she was on the road. We had flushed her out as we walked.

Dan and I broke into a downhill run to the road and arrived just as Donnie missed with his first dart. Following the barrel of the dart rifle up a driveway, I spied the calf. As I slowly walked up to Donnie’s firing position, the second dart flew true and delivered the tranquilizer to the calf.

It was only a matter of minutes before she began to wobble and lie down. On my hands and knees I crawled toward her, but she was still alert and moved away. Slowly, I worked around behind her as she finally went down. I threw myself across her head and shoulders, while Donnie and Dan came up and bound her legs. Moments later, Suze pulled up in the trailer. The three of us carried her to the trailer where we monitored her recovery. Within minutes, the tranquilizer began to wear off and she soon began to attempt to jump out of the trailer’s 4-foot high windows. It was time to get moving. The trip to Walton was quick. We successfully transferred her to a holding pen at the Tweedies’ facility. At present, Lynn hopes to tame and bring her to the County Fair. Perhaps even Andes Community Day.

A lot of people contributed to rescuing the calf in a safe manner. To all who have contributed, I want to say “thank you” from a very special bison calf for helping her reach a life-long safe haven. ~