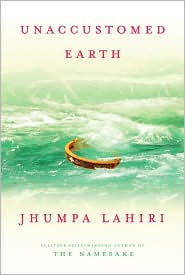 Pulitzer Prize winner Jhumpa Lahiri takes as her subject with great understanding and clarity the assimilation of first generation children in America born to Bengali parents. Assimilation is across many cultures, America having always been the expatriate’s choice for new opportunities and a better standard of living. But the chasms that develop between conservative, traditional parents and their children widen as the children grow older, formulate their own values, and take on lives of their own very different from those of their parents. Thus, the conflicts and misunderstandings are many.

This beautifully written collection of eight stories illuminates many issues that arise between Bengali parents and their children, sisters with brothers, husbands and wives; but they also delve into the assumptions made when their worlds collide leading to misinterpretations and, in some cases, heartbreak.

In the first story, “Unaccustomed Earth,” Ruma is married and living with her son and husband in Seattle because of her husband’s job. She had been a lawyer back in Brooklyn, a career ended after her mother’s death and the move to the west coast. She is now pregnant, living in a new place, and often alone since her husband’s work demands much travel. In short, she lives the kind of life her mother had lived and which she had not wanted to copy.

She stays in touch with her father who travels as a tourist to many parts of the world; when he visits, Ruma plans to tell him that he can live with her family, something tradition demands and love insists upon although she is reluctant to take him in. She assumes that he will do so even though he has never been warm to her husband and child. But her father takes to Akash, her son, plants a garden, clearly a symbol of life, and has his own opinions and reasons for not wanting to move into her home which he keeps to himself.

In some of the stories another major theme is that of the death of a beloved parent or spouse and how the survivors deal with it. In the title story, Ruma’s father takes a path very different from what Ruma expects, and he keeps his reactions and subsequent behavior a secret from her until, unwittingly, she learns the truth of her mother’s death and her father’s freedom from a postcard he had misplaced. In the last three stories which form a trilogy or novella, a young man constantly thinks of his mother’s death and resents his father’s new family. How little the young men and women in these stories really understand their parents’ relationships and their responses to inevitable and deeply regretted deaths.

Infatuation and jealousy are a third theme, particularly in “Hell-Heaven”, a very poignant tale told through the perspective of a daughter whose parents’ marriage was arranged. The mother, Aparna, becomes attached to Pranab, a young man who frequents her home often and calls her Boudi, the correct way to address a sister-in-law. Perhaps because of a loveless marriage or because Pranab is attractive and attentive, Aparna falls in love with him and goes through agonies when he marries his American girlfriend. Ironically Deborah and Pranab divorce years later and Deborah tells Aparna how jealous she had been over Pranab’s affection for her. So two women suffer for the love of one man.

The book’s title comes from a line of a great author, Nathaniel Hawthorne: “My children have had other birthplaces, and. . .shall strike their roots into unaccustomed earth.” The ordeals of assimilation are universal, and Lahiri reveals them exquisitely. ~