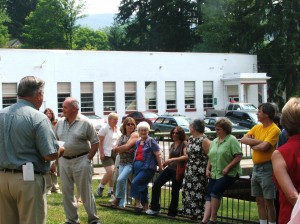 On Saturday, July 19, dozens of people gathered as Senator John Bonacic cut the ribbon on the new Town Hall building on Delaware Avenue. What the Senator didn’t know was that the new office space was dedicated to him, in gratitude for his years of service to our community. Andes Town Supervisor Martin Donnelly had kept this information from him, knowing that Bonacic shied away from such recognition. As the Senator wielded the large pair of scissors, he appeared touched by the tribute. 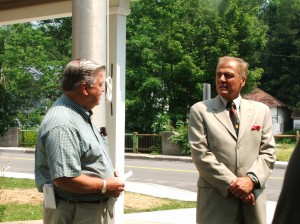 At the dedication ceremony, Donnelly also informed the crowd in attendance that the flag now flying over the building had been donated by Barbara Cunningham. She had received it from the Veteran’s Administration to honor her husband Stanley Cunningham upon his recent death. Stan had been very involved in community affairs until health issues beset him, so the Andes Town Hall seemed a fitting home for the flag. 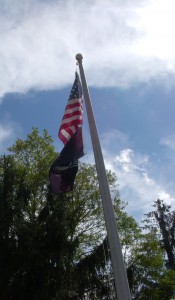 After the ribbon-cutting, the festivities moved inside to the meeting room where coffee and cake were served. Everyone in attendance appreciated the air-conditioned space since the temperature outside that daywas in the high eighties. What an improvement the new space is for the Town’s business. ~