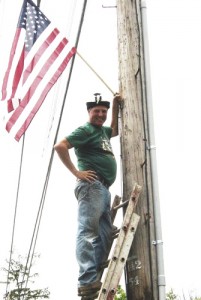 Not so grumpy Don Liddle lends a hand

The veterans marched in the Memorial Day parade as usual. When they gathered at the Andes Hotel afterwards, they expressed their dismay that the American flags were not replaced on the telephone poles on Main Street. An investigation concerning the flags’ whereabouts proved futile. No one knew where they were. As they sat there talking, they heard a noise that sounded like snarling and growling.

What the veterans didn’t know was that their conversation was overheard by the High Imperial Exalted Grumpmeister of the Grumpy Old Men. He piled into his pickup and sped towards Oneonta. He rushed into Lowes and demanded to see the store manager. The manager was paged and the Grumpmeister started in: “Andes needs forty American Flags. What are you going to do for us?”

“What? Are you crazy? What are you, some kind of @#%**@ patriotism profiteer? That’s outrageous! You better jump in your computer and come up with a better price than that or you’ll wish you had!”

Well, the Grumpmeister unleashed a barrage of profanity and continued until a crowd began to gather at the service desk. The manager realized he was confronting a deranged customer, especially since the Grumpmeister was wearing a skunk skin hat. He capitulated.

“Alright! You can have them for ten bucks apiece.” 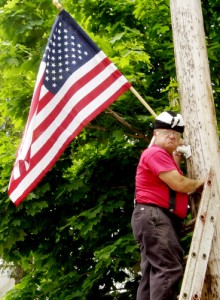 “That’s more like it. I need ’em right away. The fourth of July is coming up so I got no time to fool around.”

The Grumpmeister rushed back to Andes where Sally O’Neill arranged the financing and the flags were purchased.
The veterans wondered: “Who’s going to put them up? Maybe we can get the fire department or Margaretville Telephone Company.”

A growling noise was heard again. “I wonder what’s wrong with that dog.” they said.

The next evening, as they looked toward Palmer Hill, they saw a cloud of dust approaching the village. From the cloud emerged a small convoy of pickup trucks. One was equipped with a P.A. system and a loud song was heard:

The trucks stopped at a telephone pole near the old town hall. A group of older men in skunk-skin hats jumped out and went to work. They put up a ladder and one of them climbed up.

“Get me a vice-grip pliers!” he yelled down. “Not that, you halfwit. You wouldn’t know a vice-grips if it was clamped on your nose!”

“I love working with dimwits like you, especially when my knees are killin’ me.” 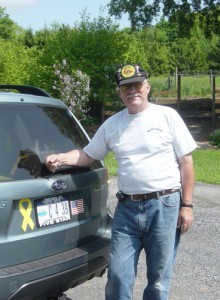 And so the work went on with as much grumbling and complaining as time would allow. Just then, Donny Liddle, a Viet Nam veteran who just retired from the telephone company, asked if he could join in and help.

“Get lost!” one of them said. “You’re too young and too happy. The last thing we need is a good natured guy who is always smiling and laughing.”

“Aw, give him a chance,” said another. “A couple of hours with us and he’ll be as grouchy as we are.”

They let Donny join and he dove into the task like he was born to do it. He threw up the ladder and scrambled up like a cat. He screwed in a bracket and plugged in the flag in a minute. Then he climbed down and hefted the ladder on his shoulder and strode off to the next pole as the other men looked on in amazement.

Down through the village they whirled, like a herd of Tasmanian Devils, grumbling and complaining along the way. In a very short time, flags were sprouting from every pole, from the old town hall to the post office.

The effect on another member of the group was miraculous. Frank Hartung, a Viet Nam veteran and long time member of the Grumpy Old Men, had his whole demeanor transformed. He began to smile uncontrollably.

“Knock it off, Hartung. You’re ruining our image,” said the others.

But Frank couldn’t stop,so the others pushed him into the cab of the truck before anyone could see him. Then they all sped off into the sunset.

A young boy was standing in front of Hogan’s with his mother. “Mommy, who were those old guys with the funny hats?”

“Those, my son, were the Grumpy Old Men.”