SO WHERE IS THE WILDLIFE? 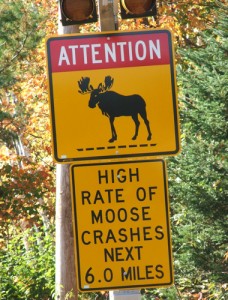 Sadly, this is the best moose photograph the hunt produced.

Despite the occasional horror story you hear about someone being mauled by a bear or other wild animal, I am still enamored of the idea of photographing one of these animals. It seems, though, that my name is on some kind of wildlife “Do Not Visit” list.

A couple of years ago, a black bear did appear on my porch, ransacking my garbage cans and awakening us in the middle of the night. Excitedly my son and I peered out at him, but quickly realized we weren’t going to get a photo of him in the inky darkness through the beveled glass of the front door. Instead, I cracked the door open a tiny bit, poked an air horn out and gave it one quick blast. Off the bear ran, and we went back to sleep, my head full of plans for future wildlife photo ops at more convenient times of day, now that the bears knew where we lived. But it wasn’t to be so. The massive brute never reappeared.

I didn’t give up. Against all warnings, I continue to leave my garbage on the porch in plastic trash cans devoid of locking devices of any type. Far too infrequent trips to the transfer station mean that the cans are often overflowing. Sounds like an inviting target for a hungry scavenger, right? But nothing. Nada. Zippo. I must have the most boring garbage in all of the Catskills.

Further flouting the advice of those in the know, the bird feeders hanging on my back porch are filled all year long. AND, a tub of seed sits nearby. I’m told sunflower seeds are sure to attract bears. Friends who live in the village relate stories of bears attacking their feeders so often they are forced to take them down as soon as spring arrives. A few weeks ago, we finally had a taker here on Doig Hollow. Again in the middle of the night, we awoke to loud noises emanating from the back porch. I ran downstairs hoping to get a glimpse of the culprit, but as soon as the outside light went on thunderous footfalls crossed the porch and receded into the darkness. Although I didn’t see the ruffian, one of my feeders was indeed torn down, and the dogs spent hours sniffing where the animal most likely dove over the railing.

Did I take the bird feeders down then? Of course not. Insane me, I was so thrilled that they’d finally been discovered that I repaired, replaced and refilled them! Surely now the bear would be back. Just the other day an article in the Catskill Mountain News reported an Andes man having his car vandalized by a bear trying to get seed out of his locked trunk. Any bear in his right mind would find it more convenient to dine at my feeders than to dismantle a car, right? But no, it seems that my birdseed is just as boring as my garbage.

It’s not just bears that shun me. Deer, turkeys, foxes, coyotes and squirrels are just some of the species that wander the woods around our house, but sightings here at our home are seldom (except during the winter when a family of squirrels makes a home in our attic). For a while I thought it was the dogs, or something about the property itself, that kept the wildlife away, but a trip my husband and I took last fall made it evident it’s just me.

For our anniversary we traveled to Maine in search of the infamous Northeastern Moose. We knew we were in the right area when we spied the flashing yellow signs – “WARNING – High Rate of Moose Collisions.” Consulting the internet, local sages, and store clerks, we developed our hunt plan. Arising before dawn, we parked by a marsh below the Department of Transportation salt shed because moose love salt. We hiked deep into a forest to sit silently beside a quiet lake known to be a favorite watering spot. At a bog crisscrossed with moose tracks we set up camp chairs and lingered for hours. Camera around my neck, we waited, and waited, and waited, day after day, to no avail.

Predictably, heading back to our motel after one of these unsuccessful treks, a huge mass loomed in front of our car in the pitch black. Bob shouted, “Moose, Moose!” as I anxiously tried to turn the camera on and pointed it at the windshield. The resulting photos were dark and blurry, but with a lot of computer manipulation, we were able to make out the faintest outline of a set of antlers, little more than the ghost of a moose. Anyone I show the picture to says “Yea, right!”, but Bob and I know a moose was there.

What is it that causes all manner of wildlife to avoid me? Has Mother Nature taken out some kind of psychic Order of Protection on their behalf? It has been suggested that I should collect, bottle and sell my perspiration, labeling it as “Anti-Bear Pheromones”. Whatever the reason, I’m kind of offended. ~