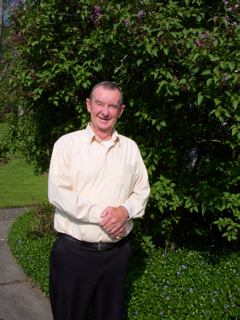 Every summer he comes to my door laden with a big bag of tomatoes. He just can’t help planting too much for himself and his housekeeper, Dorothy Balcom Rider, to eat, can or freeze. He eases his long lean frame out of his barn boots and pads into the kitchen to show me how to set the reddening globes on the sill to ripen. “I want you to enjoy them, Buffy. That’s just how it is.” And I have salads, sauces, and plenty in the freezer to spark my winter menus.

Walter Gladstone has been generous with his produce, time, and money his whole life. He was recently appointed by the Governor to the SUNY Delhi College Council and named Friend of the Extension by the Cornell Cooperative Extension of Delaware County. As a tribute to his reputation for good sense and integrity, the rock-ribbed Republican Village of Andes elected this life-long Democrat Mayor for three terms. The Town elected him Supervisor for four.

Good sense and integrity, yes, but he doesn’t let any grass grow under his feet. He comes by this will to action naturally. His parents, Walter and Edna Bresee, met in the Candy Kitchen in Delhi the night of her graduation from Delaware Academy. He spirited her away from her parents’ Meredith farm, hopped a bus for New York, grabbed a witness off the street and married her in the Little Church around the Corner. He brought her home to the grand Queen Anne house on Main Street he had bought from Squire Oliver’s estate (now the Paul Moore house). A year later, he took her by sleigh to the home of his sister Grace on Gladstone Hollow (now Dorothy Lyman’s). Grace, a midwife, and Dr. Moyer delivered Walter Bresee on December 21, 1929. Sisters Gloria and Carol followed three and twelve years later.

Walter’s home was next door to the show ring (now the bank) where Gladstone Brothers (his father and uncle) displayed 200-300 draft horses for sale every spring. Their Feed Store occupied the old Hunting Tavern, which is now, thanks to a gift from Walter to the Andes Society for History and Culture, the restored Hunting Tavern Museum.

Walter feels lucky to have grown up in Andes. His friends were “good kids with good parents. We were lucky to be born to who we were.” They sledded down the slope behind Judge Bruce’s house and played sports. But Walter’s passion, then and now, was farming. He shone in the 4H Club and Future Farmers of America. He became an F.F.A. State officer and received the American Farmer Key in Kansas City. A proud moment.

After graduating from ACS under “stern and fair” Principal Red Johns, Walter went up to Cornell University. His college career was tragically cut short by the sudden illness and death at 49 of his father. Walter came home to run the feed and livestock business.

Remembering his parents’ courtship you will not be surprised to learn that Walter met Pat Morgan one Mothers’ Day and married her September 21st. He had been delegated to drive his mother’s dinner companion at the Andes Hotel back to Delhi. He sauntered down to the hotel and there in the bar sat a lovely young lady having dinner with her mother. Moments after being introduced to Pat Morgan, Walter inveigled Mrs. Morgan into taking the friend back to Delhi while Walter undertook to escort Pat. Four months later they set up housekeeping in the house on the knoll on Gladstone Hollow where Walter could survey his acres of cropland and the 37 heifers he had bought from the Gerry Estate to start his herd, grazing peacefully in the pasture. It was a great place to raise their three children: Polly, who is now a teacher in Delhi and has three children and three grandchildren of her own; Nancy, a physical therapist, who lives in Littleton, Colorado with her husband Scott and two children; and Walter Morgan, who with his wife Margaret and three sons raise 2000 cows in Bradford, Vermont in the Connecticut River valley. Walter marvels, “There’s no stones in that soil! That’s just the way it is.”

Pat died in 1997 after a long illness. Walter continues to be active in his community. He gives generously to causes he believes in: the Margaretville Hospital, the Andes Public Library, churches and 4H Camp Shankitunk, among others. He has served on the Board of Directors of the National Bank of Delaware County and President of the hospital board. He is president of the Cemetery Board, an Elder and Trustee in the Presbyterian Church, and a 50 year member of the Andes Fire Department.

Walter quietly makes it his business to drive friends to the doctor’s or the youth group on an outing, to be sure the guy felled by a stroke has an advocate and a house ready to come home to after rehab. He opens his home to members of a chorus from New York, strangers, who become fast friends. His was the first farm family I ever knew that took vacations. It gave them time together and a window on the wider world. In 1960, they bought a cottage on Perch Lake so Pat and the kids could summer there and Walter come up over night and on rainy days when he couldn’t hay it. For all his openness and cultural awareness, Walter has never lost his love for farming. To this day he feels, “You’ve got to live in the barn with the cows.”

We are all indebted to Walter Gladstone for a lifetime of investment in Andes, its soil, its institutions, and its people. That’s just the way it is, Walter.~