The Senator’s Wife, by Sue Miller 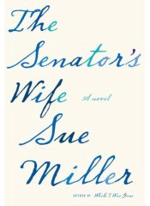 This is a story of two women and their marriages. Meri is a young woman, newly wed and pregnant, and Delia, a 70-year-old woman married to a Senator but living apart from him. Some readers will find things in the two marriages that resonate with some situations in their own lives and marriages, the differences depending on the differences in the generations. But Sue Miller is master of the game of the human condition, particularly where families are concerned. She captures the love, anger, responsibility, loyalty, carelessness and betrayal that occur in all relationships to some extent but frequently with varying results.

Meri is reluctantly pregnant and has difficulty with the child after he is born. She loves her husband but they are young, and Meri starts to feel she may have made a mistake: Nathan often works late and she feels neglected just as she was by her own family, and she must search for fulfillment in her life, motherhood, and marriage. Delia lives in the opposite side of the two-family home and she and Meri become friends despite the disparity in their ages. Delia is the loyal, loving wife who stands by Tom and helps him politically despite all of his infidelities. Instead of divorce, Delia stays married to him, still feeling the most erotic emotions for him, but she can no longer live with him.

And so these two women come together, one young and still trying to put closure to the sadness and neglect of her childhood and feeling her way into adulthood, one old and still in love with her husband despite his betrayals. Over the years she calls him and they come together as lovers, leading to one of the biggest questions the book raises. Although Delia says that living without Tom has “been the making of her”, we must wonder how a woman puts up with such a humiliating relationship when she has enough reason to hate the man who has hurt her so often. In the Peking Palace where she and Tom frequently eat, her fortune cookie says that the “dreamer will awake eventually”. We find out much later whether she does or doesn’t.

When Delia goes to Paris where she has an apartment, she asks Meri to take care of her plants and mail and trustingly gives her a key. Meri snoops into Delia’s life and finds revealing reasons why Tom and Delia are still together in their fashion despite their terrible marriage. We get an answer to the question about Delia that has to do with her recognition in a sudden and blinding epiphany of why Tom seeks out other women. As for Meri, her behavior throws a new light on her character and leads us to believe that there is more of the same to come.

Ultimately the book is about women stumbling to find ways to live their lives and women who give up their lives to the thralldom of love for a man who will always betray them. But it is through a final betrayal that Delia is finally freed. Miller’s themes include the carelessness of youth and the awful things that can result; she describes with great clarity how people can love each other and betray each other, and she talks about forgiveness in detailed, flowing prose. The climax of the book is heart pounding.~