VIEW: FROM HIPPOS TO PEEPERS 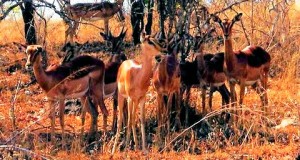 On St. Patrick’s Day, my son David and I flew from New York to Mozambique, Southern East Africa, where his wife Theresa is Chief of Child Protective Services for UNICEF. It took 48 hours to traverse seven time zones and two hemispheres to a continent full of strange and wonderful sights.

We spent two days in Kruger National Park in South Africa. Imagine the state of Vermont cleared of all residents for 100 years and reserved for native flora and fauna to flourish unimpeded while people were invited in as visitors: to observe, to shoot only with cameras, to sleep and eat at designated delightful spots, and leave.

For two days our guide drove s-l-o-w-l-y through the park while we scoured every inch of high savannah (veldt) for wildlife. And here they come. Right up to the road. Elephants, from the old and wrinkled down to slick babies who wait until given the signal, then dash across the road hugging their mothers’ legs and rumps. The great beasts reach above their heads and snatch bundles of knob thorn acacia to stuff into cavernous mouths. A mother patiently teaches her little one the art, his little bunches falling apart before he can maneuver them home, while his big sister wanders off to her own tree. Mama trumpets. Sister pays no attention. Again, a shorter, more insistent blast. With a last sweep of acacia and a “Coming Mama” shrug, sister sashays down a parallel path finally veering toward her retreating family as we drive on. At the river’s edge, a big herd gambols and splashes, showering and sluicing off the red sand they have sifted over themselves on land.

Every elephant seems a paradox: of power and patience, great bulk and gentleness, an almost inanimate, age-old being. 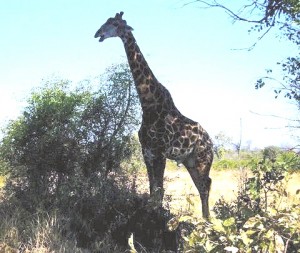 Giraffes are part of the landscape at Kruger Park

Baboons prance along the road merrily keeping traffic at bay. Babies cling to their mothers, underneath nursing or atop, sitting erect until mama trots. Then they flatten out along her back, long arms around her shoulders. The alpha male, big, dark gray, with a long serious face, dictates the direction of his tribe’s flow. Meanwhile, they frolic, cropping acacia berries from below, leaping up trees and dropping down, crossing and re-crossing the road until, at his unheard signal, the whole troupe descends to the waterhole.

Antelope enchant. First the graceful impala, so many we finally just ride slowly by with a careless, “Oh, impala.” The prettily marked does are alert, little ones prancing, yearlings sprouting lyre-shaped horns, all earnestly grazing and browsing in the distance or on the verge of the road. Once, we see a pair of darling steenbok (they sometimes mate for life), all attention, big ears like Gothic arches featherstitched with a pattern to match. Their tawny bodies balance on twig-like legs and elfin hooves.

From time to time we glimpse a lone wildebeest, slate gray and shaggy with broad shoulders and twirled horns. Greater still are the kudu, patriarchs of the antelope, rising from the veldt at a distance, dignified and aloof. Only the bushbuck dashes for cover and stays behind a scrim of shrubs until we pass. She is most like our deer, tan except for the white tail, big, rounded ears, alert and alarmed.

Zebra. Alphabet book animals come to life! Each a unique pattern, fine and sleek. You can’t help wonder if they know how splendid they are. Later we saw small herds of wildebeests accompanying zebra. Apparently a symbiotic meld. The wildebeest’s sharp hearing complements the keen sight of their striped friends.

The other improbable and uniquely patterned fellow made his appearance nibbling the tops of that same (inedible) thorny acacia. Half comical head and neck, half sturdy body on elegant legs. And all over a kind of mosaic that first blends then stands out in bold relief. Oh, the giraffe! Invented by Dr. Seuss?

Of course, Kipling solved the mystery of the rhinoceros. At least his knobby skin. But everything about him is strange. So enormous, the under-slung snout, the up-tilted horn, the mighty shoulders, and the even mightier double hump of his hind end. Going about his business as if he were the most banal of creatures.

At lunch, while we were watching a pod of hippos snort and blow muddy water from their blowholes, then sink into torpor, noses just above the water, slicker backs barely visible, David noticed something in the tall reeds. Dark and mysterious, it rose and crunched reeds with a “crack” we heard from 50 yards away. A huge water buffalo, his broad curving rack of horns carried on a thick bony yoke across his head, trudged into the water, entered the reeds on the opposite bank, and instantly disappeared.
The ubiquitous warthog. A beast so ill-favored only its mother could love it. The last one we saw walked beside us determinedly on its short legs, a lone horn curling up on its left jaw, two gray skin-covered protuberances under its piggy eyes, negligible ears atop a coal scuttle head.

Kruger was a birders’ paradise but I will only mention the ostrich: popeyed heads propped on flexible feathered tubes over fat pillow bodies. Their long yellow legs stride across the veldt as if they would conquer it.

On our way out of Kruger, a great spotted hyena sat by the side of the road, snout quivering, eyes bright, formidable fangs bared, round ears alert, but posing as if for his picture; in broad daylight, not slinking to some lion’s kill or hiding out until night. He lay down and sat back up, but held his spot. We drove on and saw just beyond, screened by some scrub trees, a herd of impala, lovely and unaware, upwind from the menace. No way I would wait to watch.

Now, I am sitting in my Andes backyard under a blue-violet sky. Robins announce spring with their happy “chirrup”, tugging away for worms and snatching wisps of dry grass. Nesting? The cardinal’s red robe shines as ecclesiastical against the greening grass as it did against the snow a month ago. 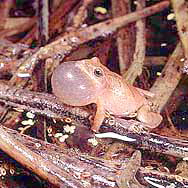 Back in Andes, the peepers announce the new season

Yesterday a fat, fluffy rabbit ate birdseed under my feeder, her eyes alight, ears erect, twitching nose testing the wind. Suddenly the squirrel-proof domed feeder swings crazily as a tawny flying squirrel lands inside. He munches and stuffs his cheeks before gliding to the Colorado blue spruce.

And last night, under a new moon, we heard peepers! I have often gone out to the little pond at the edge of the school ground to try to see them. I hear the shriek right in front of me but see nothing. Well. The peeper is a tiny tree frog, ¾ of an inch long, whose neck balloons out to blare his shrill mating cry. And he can turn the same color as the twig or leaf on which he’s perched. Small wonder!

If we go out, if we look and listen, we may see wonders all around us, catch sight of the flying squirrel as he sails into the feeder, or see the peeper blow his strident horn. Give yourself time. Go s-l-o-w-l-y. Eyes wide open. ~