By Jack McShaneThe New York State Department of Environmental Conservation (DEC) is concerned about the decreasing number of hunters and how this will have a very negative impact on their ability to control the ever expanding deer herd in many parts of the state. 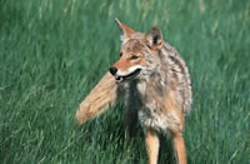 It has been my observation that this is not happening in the Andes area, at least not on my 371 acres here in Bussey Hollow. I am seeing more and more of what I call “rogue hunters” taking more deer surreptitiously and without buying the required hunting license. They roam from private land to private land, much of which is posted, without obtaining permission of the land owners, and do not heed to our hunting regulations. They hunt day and night and beyond our specified seasons in fact they hunt year round. They rampantly and with impunity take does and fawns without the required antantlerless permits. They do not tag and report their kills to the DEC which is required so that a reasonable estimation of the number of deer killed per season can be made. This undermines the DEC’s effort to manage the deer herd and make decisions about the number of permits to issue in future seasons. These rogue hunters are not local as they arrived in our area mostly in the nineteen eighties.

Their numbers have risen rapidly and are continuing to do so. This winter, I have found the remnants of six deer killed by these rogues on my property. How many more have been taken of which I am not aware?

OK, who are these sneaky rogues that are breaking all the rules? I have tracked and identified them. They are the wily coyotes that are rarely seen but often heard howling at night about their success or lack thereof. There are more coyote tracks in the snow than there are deer tracks, at least on my property. Coyote tracks were a rarity twenty years ago. They are doing what was done previously by wolves and mountain lions, both top predators which we have exterminated. They are filling a niche left open in the natural environment that we ourselves do not adequately fill. Now that the number of small prey, such as rabbits, woodchucks and other rodents which had been their normal diet has been decimated, they are teaming up and preying on the deer. This phenomenon had been forecast by researchers in the Adirondacks twenty years ago. There, when the coyotes arrived much earlier, it was noted that as the small prey diminished the coyotes formed alpha male packs similar to the wolves of the past and began to run and kill deer. One of the researchers told me that it would be some time before this might happen in the Catskills. That “some time” is now.

For me the following is my dilemma. From the standpoint of an avid deer hunter and an aficionado of free-range venison, I have fewer opportunities to fill my freezer. I now have a major competitor that is very much more efficient at hunting than I am. Should I try to eliminate them by hunting them and or trapping them? No, I am too old to sit in the freezing woods squeaking like an injured mouse or rabbit trying to lure them within shotgun range in the middle of the night. As for trapping, I have no traps or license to legally do so and there is too much potential for peripheral damage, i.e. innocent raccoons, skunks, fisher, etc. and I don’t want that. Research has also shown that when coyotes are persecuted as they were out west in the past, their fertility rate goes up, and instead of two or three pups they have seven or eight. They are almost impossible to eradicate.

If I switch from my hunter’s cap to my environmentalist/wildlife biologist cap for a different perspective, then things look much better. Reducing deer numbers will result in better forest regeneration which is being very negatively impacted. As it is now, with a large deer population much of the lower part of the forest is over browsed with some of the more important species such as oak and sugar maple never getting past deer browse height. This lower structure, as it is called by forestry experts, is also necessary habitat for many species of birds and terrestrial creatures. Although the dynamics of the predator/prey relationship are extremely complex, involving subtleties of weather, disease, snow conditions, the food base (annual variations in mast production), the best case scenario from this point of view is the following; deer numbers are drastically reduced eventually resulting in a lower coyote population (starvation), strong forest regeneration, resulting in greater bio diversity and a healthier forest as a whole.

Of course as the deer and other critter populations recover, which they will, so will the coyotes and the natural up and down cycle of nature will continue. As much as we Homo sapiens would like to see a static environment with a continuous bounty for our pleasure, the real natural world is ever-changing. This dynamism, with which we love to tamper, is nature at its best.
So, I will live with what nature has bestowed upon us. As stated very succinctly by a gray wolf recovery coordinator for the US Fish & Wildlife Service, (I take the liberty to change the species in his quote from wolf to coyote) “If you’re the kind of animal that lives on dead stuff, coyotes provide deer carcasses scattered throughout the landscape so if you are an eagle, fisher, raccoon, bear, raven, crow or chickadee, that’s a whole web of life supported by these predators.” In that he included eagle, let me say that I was alerted to one of the kills on the property by a bald eagle rising from one of my upper fields early one morning and slowly circling only to land in a nearby tree, this being only the third bald eagle sighting on the property in twenty-two years (my tenure). As I approached the location I was greeted also by at least thirty crows and a few ravens that loudly chastised me for interrupting their fresh venison banquet. Tracks in the snow indicated that just about every creature listed above (except the bear) had over the night participated in the feast.

Enough about rogue hunters. Spring is literally in the air. On March 8th there were two red-winged blackbirds at my feeder, a week later than they arrived last year. This morning, March 10th, the first pair of bluebirds were inspecting the bluebird box just off my deck. This reminds me to get out and prep those fifty some odd bluebird and wood duck boxes that are scattered throughout the property to accommodate the incoming feathered migrants in need of housing.~