A beautiful doe has been making her home in our backyard for the past few weeks. Her leg is hurt. I can see the raw flesh where she’s been chewed or shot. She moves slowly and awkwardly on three legs, keeping the wounded leg raised. She chews away at the foliage and groundcovers, pulling up roots and destroying the garden. What shall I do?

I feel sorry for her. She’s found easy access to a good source of food and a soft bed of leaves to rest on further back in the woods, where she thinks she can’t be seen.

Alan opens the kitchen door and shouts, “Get out of here!” waving his arms and putting on his most ferocious voice. The doe stares back at him with mournful eyes, not even trying to look rebellious, and goes on chomping away at a holly bush that’s just barely recovering from a similar attack a few years ago. He tries ringing our very loud cowbell, hanging in the kitchen. She ignores that too, doesn’t even lift her head, so determined is she to satisfy her hunger. I go to the door, ready to scream at her, but she takes one look at me, out of the corner of her eye, and before I utter a sound, she hobbles off, into the woods, to lie down in the soft bed she’s made for herself. 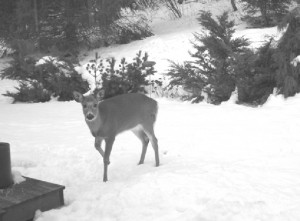 The wounded doe comes to nourish herself in the Galowitz garden

Previously, I’ve protected the bushes that I’ve learned that the deer love by tying an old stocking containing a piece of Dial, or other strong smelling soap on their branches. That had been working so well and had lasted for a couple of years without replacing the soap, that I began to feel that the plants were safe. Now the snow was too high or the ground too muddy to try to protect them. Not only has she demolished several bushes and uprooted groundcovers, but she has managed to take down a new birdfeeder filled with special food to attract songbirds, empty the feeder and eat the contents.

When our daughter, Amy, came to visit, having heard about the plight of the doe, she brought a bag of apples to feed her. “No, Amy, if you feed her, she’ll never leave. Not only that, but others might join her.”

More experienced neighbors have offered advice such as sprinkling mothballs around the plantings. I haven’t seen mothballs in years, but I’ll look for them. Still others have told me we must shoot her. I don’t own a gun, but if I did I doubt that either Alan or I could shoot that beautiful animal although that might be the most humane thing to do.

Maybe she’ll recover and leave my garden to return to a better, friendlier place, if a coyote doesn’t get her first. Hopefully, then, with some TLC the foliage will grow back. ~