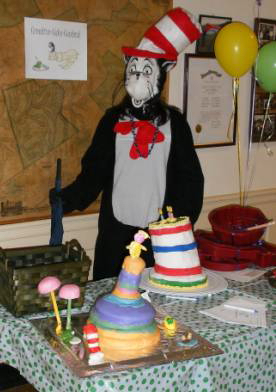 For those who braved the weather, the March 1st Dr. Seuss party sponsored by the Andes Central School PTSA was a warm and wonderful way to spend the day.

The gym was filled with Seuss themed games for children of all ages and skill levels. Winners earned colored Mardi Gras style bead necklaces. Since each game had its own color necklace, the older kids quickly figured out which games were more difficult and which corresponding necklaces were more highly coveted. The hardest games of all, a bean bag balance based on “Ten Apples up on Top,” and a multiple object balance based on “The Cat in the Hat,” rewarded winners with slap bracelets. The kids all wore their necklaces and bracelets with pride and big smiles.

Boys and girls took a break from the games to wander over to the craft table. There were dot-to-dots, mazes, and pages to color. But the overwhelming hit at the craft table was choosing the colors for your own Daisyhead Maisy headband made by Stephanie Fitzgerald or her brother Zachary. Almost every head in the gym, adults as well as children, was sporting a brightly colored flower bouncing on a curled pipe cleaner stem; a look that fit right in with the fun and festivity of the event. 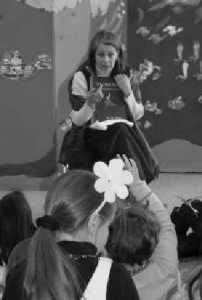 Award winning children’s book author, Teddy Slater, started the first of the day’s four storytimes by reading the classic, The Cat in the Hat. Local favorite, Delhi librarian Eloise Henault had the kids spellbound with her recitation of McElligot’s Pool. Starr LaTronica, Director of Youth Services for the Four County Library System, read Green Eggs and Ham in honor of her son Sam. The final story was read by Betty Aberlin, better known as “Lady Aberlin” from Mister Roger’s Neighborhood. While the kids were delighted with her reading of The 500 Hats of Bartholomew Cubbins, the looks on the faces of the adults revealed that many were taken back to their own childhoods by Ms. Aberlin’s presence. When she was finished reading, some even timidly requested an autograph, a request she willingly granted.

Promotional posters for the event and the flyers sent home with the school kids weeks ago challenged creative cooks to bring a Seuss inspired cake to the party. The results were truly enchanting (and later proved to be delicious as well). The “Creative Cake Contest” winners – Cassidy and Jackie Miskovitz, Kaitlynn and Diane Hall, and Melissa Steinbuch – all earned cutting-edge silicone bakeware.~