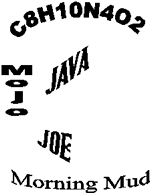 I’m accustomed to just one big early mug at home. John and I have an espresso grind Moka Java delivered by UPS from the J.B.Peel, Inc. Coffee company in Red Hook. (We freeze the bags until we’re ready to use them.) I prepare the coffee with steaming milk, cinnamon, nutmeg and sugar!I asked a few customers in the store what they did for coffee at home. Jim and Bruce at Perch Lake said they take five gallon glass jars to the Wolf Hollow spring pipe, 2 miles up from the Tremperskill, and use that for their coffee making. The #10 Chock full o’ Nuts can they buy from Costco is their favorite to which they’ll often add a cardamom pod when brewing.

Marie, who grew up in a Brooklyn Italian neighborhood, mixes cinnamon in with her grounds.

Buffy drinks café Bustelo, a habit she started when living in East Harlem (also known as “Spanish Harlem”), which she brews in her own cappuccino machine.

Nora Cole puts out the flag when coffee is on-usually at around 4 pm–and family members often stop by for coffee, cake, and other snacks. In Denmark everyone has coffee at 3pm and Nora’s mother continued the afternoon coffee hour tradition in Andes.