MY KINGDOM FOR A HORSE

Too Victorious (Vickie), left, and her 7-month old son Bubba

By Bill PiervincenziIn and around the environs of Andes the sound of horses whinnying is in the air. There are more horses in the Andes area than ever before. Quarter horses, Arabians, Thoroughbreds, Fresians, Morgans, Percherons, Belgians, just plain horses and even donkeys seem to be everywhere. Will Andes soon rival Lexington, Kentucky or Ocala, Florida as the equestrian center of the United States?

Well, before we get carried away it might be useful to take a step back and see that what is going on in Andes is no different than what is going on in rural areas all over the U.S., especially if it is a place where people are retiring in greater numbers. Retirees, including yours truly, are finally getting the opportunity to live where they can realize the lifelong dream of horse ownership.

In my case the dream was with me as far back as I can remember. As a five-year-old in Queens, I saw no reason why my parents shouldn’t allow me to keep a pony in the garage on our 30′ by 100′ plot. I would follow the horse drawn milk wagon back to the stables in 1948, just to see and smell the horses stabled at the junction of Francis Lewis Blvd. and Jamaica Ave. As an eleven-year-old, I would collect money from my paper route after a week’s work and then feed dimes into a mechanical horse in front of the candy store while imagining all kinds of adventures. I read Walter Farley’s Black Stallion, and I was Alex Ramsey, riding the Black to the finish line at Belmont Park.

Later, in high school, I would work at a local riding academy and as a hot walker at Belmont Racetrack. I also worked on a dairy farm in Roscoe where my boss still used a pair of Belgians to get the hay in. As long as I was around horses, I was happy.

Later, I married the daughter of a jockey. The realities of raising a family in suburbia put my equestrian dreams on hold for a long while, but when I came to Andes permanently ten years ago, I was ready for horses. Well I have them now and they are an important part of my life. It would be nice if I could end this article on this happy note but I can’t. There is another side to all this that must be mentioned.

On January 7, 2008, the Wall Street Journal featured a front page article on horse ownership. You can read the entire article on line at: The Wall Street Journal . According to the article, there are over 9 million horses in the U.S. today, compared to 6 million in the 1990’s. If a person retires at age 55, they should think long and hard about taking on the responsibility of an animal that can live 30 years. One who is enthusiastic about farm work at 55 may feel differently when they are 85. 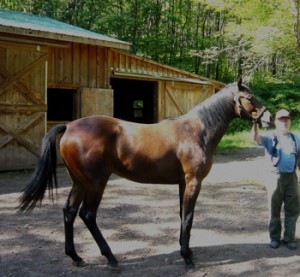 They should also look hard at their bank account and make sure it contains enough resources to allow for the price of hay and grain going through the roof because of $100 a barrel oil or a drought in the southeast. The horse will need a $50 pedicure every six weeks. Then there are yearly immunizations, worming, grooming supplies, tack, etc. It is estimated that 65,000 horses a year are being sent to slaughter because their owners can’t afford to keep them any longer. Since Congress recently closed the three remaining equine slaughterhouses in the U.S., horses are now sent to Canada or Mexico for slaughter, for consumption in Europe and Japan.

Worse than that are the horses that are being seized for neglect and abuse. These are often perfectly good animals whose owners simply do not provide for their care. It might be the horse of a young person who goes off to college, or an animal left over after a divorce, or a horse that is part of the legacy of a deceased person.

I currently have two perfectly delightful Arabians who were rescued from such conditions. I would encourage anyone considering horse ownership to consider such adoptions. They can be very gratifying. If you need a referral to an equine adoption agency, give me a call and I’ll be glad to help you.

With all that said, what is all the fuss about horses anyway? Here we have a big, dumb herbivore with a brain the size of your fist. Why have the poets graced horses with the qualities of nobility, loyalty and courage? Why do the Bedouins share their tents with them? Why do they figure so prominently in the art and literature of cultures everywhere? Are there really horses like Trigger that will untie knots so Roy Rogers can go free, or horses like Silver that will stomp the life out of a rattlesnake that is bent on striking at the Lone Ranger? When my horses nuzzle me, is it affection, or is it the carrots in my pockets? The facts are more sobering. A horse is a social animal that if given a choice prefers other horses to people.

If humans insert themselves into the horses’ social scheme, they will be accepted as if they are horses, too. Now their whole world is changed. Part of the social equipment a horse possesses is an incredibly sensitive perception of the slightest nuance of emotional body language. This makes the horse a perfect emotional mirror. If you notice that your animals are uncooperative and seem to always do the worst thing, look at yourself and you will find out why. As you come to know your animals, you will see that they have a sense of humor and can be very playful, they feel guilt when they know they did something you don’t approve of and they have a sense of justice that causes them to suffer hurt feelings when they are treated unjustly.

If you are fortunate enough to be able to merge psychically with your horse, you will understand immediately what all the fuss is about. You will be one with your animal. You will be communicating on a very special level reserved for human/equine interactions. Then you will truly be owned by your horse and you will be a very lucky person. ~