More interesting than the astronomical and ‘calendrical’ reasons for leap year are the folk traditions that have grown around them. Leap years, seen as unusual in the otherwise orderly progression of the calendar, have, not surprisingly, spawned some “out of the box” folkways. 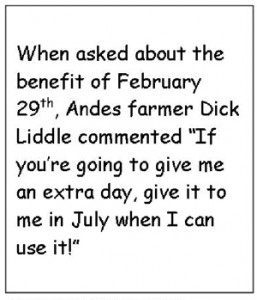 According to tradition, leap years were the only times when women could propose marriage to men-often termed “The Ladies Privilege.” An Irish website traces the “Ladies Day” practice of allowing women to ask men to marry all year long during Leap Year back to an old Irish legend concerning St. Patrick and St. Bridget in the 5th century. At that time the custom of nuns not marrying was a personal decision, not one required by the church. Bridget told St. Patrick that her nuns were upset at not having the opportunity to ask anyone to marry them. Patrick suggested the solution of allowing women to do this once very 7 years, but Bridget wanted it to happen every 4 years. After he agreed, Bridget proposed to him. Patrick declined the offer, but he did promise her a silk gown and a kiss.

A tradition was thus born, as during the Middle Ages in the British Isles an unwritten law was in effect. It said that every man who refused a woman’s proposal during Leap Year had to compensate her with a kiss and either a silk gown or a pair of gloves. But the rule included a stipulation: she had to give him a warning by letting a red petticoat show beneath her skirt hem. By the 15th century, this custom was legalized in parts of Italy and France. The version that came to the U.S. was done only in fun. But it continued in the British Isles and Europe until the 1800s. 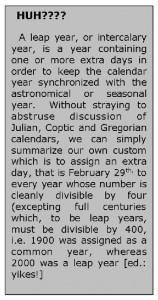 I found various mentions of actual legislation enforcing compliance with these customs. Wikipedia refers to a 1288 law by Queen Margaret of Scotland, “then age five and living in Norway,” whereby fines were levied if a proposal was refused by the man, with compensation ranging from a kiss to a pound sterling to a silk gown in order to soften the blow.

On a different note, in Greece, it was believed that getting married in a leap year was bad luck for the couple. Thus, mainly in past centuries, couples avoided setting a marriage date in a leap year.

The Snopes’ website, debunker of urban legends and old wives tales, good-humoredly relegates these afore-mentioned historical mentions to the status of a good folktale. It cites also the superstition which decrees leap years as notably excellent for beginning important undertakings or business ventures, with the choice of February 29 deemed particularly astute, including conceiving a baby during that particular 24 hour stretch. Also that children born on February 29 are fated to be favored by Dame Fortune.~